Today’s article is all about Warhammer 40k Dank Memes, so if your new to Warhammer 40k or just want some funny Memes to brighten your day then this is the article for you! As such, we will go through some of the more common memes and give you some reference to their meaning.

So, Heresy is a catch-all term amongst Warhammer players that can mean a few different things. Firstly, it usually denotes something unpleasant, or something that doesn’t fit with the Grim Darkness of the setting.

As such, the image above is a good example. The 40k universe is a brutal, grim, and dark setting filled with strife and war. However, My little pony is the complete opposite, featuring bright colors, friendship, and cutesy magical ponies. As a result, 40k players will usually respond with disdain to such bright and upbeat themes. Especially if someone is trying to shoehorn cute kids shows into their Grim-Dark.

On a separate note, if you hear a 40k player muttering about HERESY while looking at your army list. Then it probably means your playing some cheesy tier 1 netlist in a casual or narrative game.

However, not all HERESY memes have a negative connotation, particularly if you’re a Chaos player (like me).

WAAAGH! and BLOOD FOR THE BLOOD GOD!

Next, we have what is probably the two most quoted things in all of Warhammer amongst its player base. Most of us really can’t help but blurt these out at least once a week.

Warhammer 40k dank memes like the one above, highlight the pervasiveness of “BLOOD FOR THE BLOOD GOD!” memes. To clarify, the previous quote is a common phrase amongst the servants of Khorn in the Warhammer 40k setting. Its been seen in everything from books to Videogames and as a result, it has bled into real life as well. So much so, that it’s not uncommon to hear someone at a tournament or busy game night yell it out at some point. Typically when someone makes a successful charge with some Khorn berzerkers. However, “BLOOD FOR THE BLOOD GOD” doesn’t even come close to the next Warhammer 40k dank meme.

“WAAAAAGH!” is probably the most quoted Warhammer 40k phrase next to “Heresy!”. Its the hallmark phrase of Orks, typically when they are charging at something. Unlike the other common Warhammer phrases, you WILL hear someone yell this one. Also, it is not just something you will hear at your local store or tournament, but all over the internet as well. Every time I’ve seen a live stream or video comment section there will be at least one “WAAAAAGH!” in there. Ork players really can’t help themselves, and I can’t help but love them for it.

Firstly, the Imperial Guard has one of the toughest jobs in all of 40k. After all, they are just regular men and women fighting in wars against superhumans, monsters, and ancient aliens with reality-altering weapons. Also, they have to contend with commanding officers that can range from incompetent to bloodthirsty, and everything in-between. Resulting in getting terrible orders, like charging into ork mobs or tank formations. However, all of these terrible facets of the imperial guard can be made into some really funny memes.

“Dakka” is the standard Ork term for a lot of firepower and is another pervasive theme in 40k. The saying originates with Orks love of firearms, despite the fact they clearly don’t know how to aim with them. This shows in their rules as Orks have a universal BS 5+, but they make up for it by having a massive volume of shots. Thusly, you will commonly see Ork players pick up two whole handfuls of dice when shooting some of their units. Also, let’s be honest, it’s really satisfying to pick up and roll 90 dice, even if only 15 of them hit.

Well, that’s all we have for today, and now you have some entry-level knowledge to Warhammer 40k dank memes. However, there are a whole lot of memes out there that we haven’t even covered yet. So if you liked this article be sure to let us know so we can make more of them. Also, Since your here and clearly have a good sense of humor, why not check out my Grot Tactics Article. Conversely, you can check out this sweet Battle Report.

If you want to talk to the Nights at the Game Table team and discuss this article, and everything Warhammer with them join Game Talk For Gamers.

Don’t know what Warhammer 40k is and how to play it? Check out the video that we made here just for you.

If you already know how to play the game and you’d like a free guide that teaches you how to paint professional-looking miniatures, advanced tournament tips from a 40k World Champion, how to find more time to play, and simple methods to get cheap miniatures go here.

If you’d like a breakdown of the advanced tactics and strategies for all 40k armies, painting tutorials from a Golden Demon winner, secret battle reports and tons more consider becoming a Nights at the Game Table Member today. Click on this link to learn more.

As always thanks for reading!

Special thanks to Games Workshop for the use of their images and for making the best game ever!

- Buy 2 products or more and you will save on shipping.

Click “Buy it now” to Choose Size.Buy 2 or more and SAVE on shipping!

Other people want this. Over 431 people have this in their cart right now.

Printed in the USA!

Heresy is a term used on the internet to describe a dislike of someone or a misdemeanor. It is commonly associated with Warhammer 40,000, and has been the subject of numerous image macros.

The term "heresy" by definition refers to any belief or action that goes against common beliefs and customs present in society. A heretic is a person who has been accused of heresy. The context of the term is usually used in relation to religion. However, on the internet, the word is used as a general insult. This context of the word came from the 1987 tabletop miniature war-game Warhammer 40,000. In the game, humanity has come to worship "The Emperor of Mankind" (shown below) who led the Great Crusade to restore humanity to the stars, as the one true god. In the Emperor's realm, the Church ruled over mankind. Because of the leadership of the church, heresy became one of the worst possible crimes a person could commit along with blasphemy. 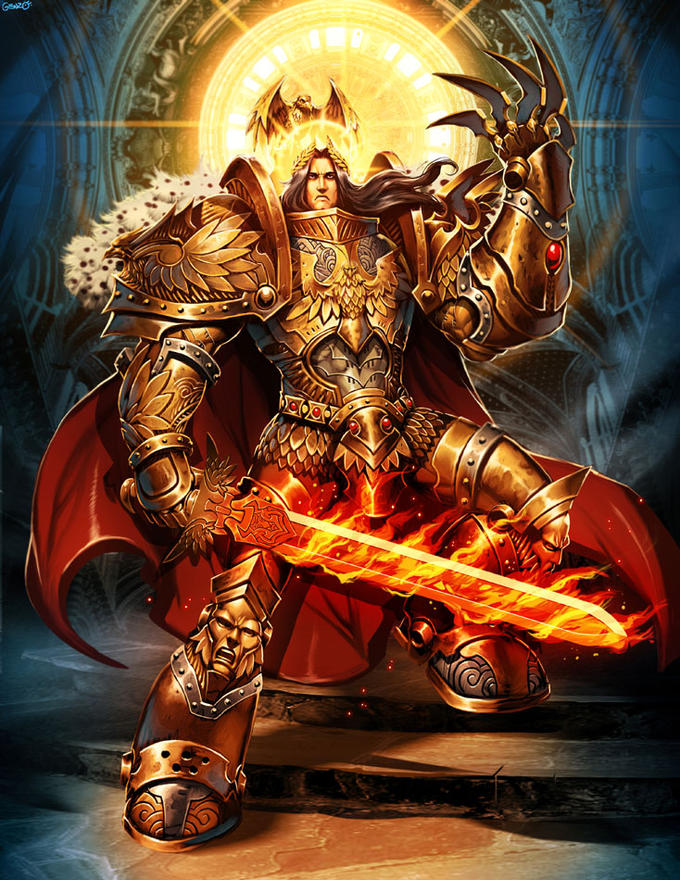 This assignment is from Chapter 5. The assignment was to create a meme based on one of the heresies of the early Church. The creation of a humorous image is supposed to show how we understand the subject matter enough to make a joke out of it. I made my meme based on the heresy of Apollinarianism.

Learning Objective: List the major rifts in the unity of the church

I accomplished the learning objective of "list the major firsts in the unity of the Church" through this project. I met this objective because having a thorough understanding of the early heresies allowed me to find a way to make a relatable and understandable meme. Although I only made one meme for a particular heretical view, I still learned about the major rifts in the early Church. This assignment was meaningful to me because I was able to put the history of my church into a format that is relatable to almost every person around my age.

ISO: An effective communicator who utilizes practical and technological methods to access, apply, and create information

Doing this assignment fulfilled the ISO of "being an effective communicator who utilizes practical and technological methods to access, apply, and create information. This is because I used a contemporary and popular form of communication in order to give information about a heresy of the early church. This is much more interesting and attention-holding than an essay or a presentation for example, because it is more enjoyable to read. Making things more relevant to the audience is a sign of an effective communicator.

Therefore, I immediately noted the change of location. Vika noticed with difficulty - she was hiding in the depths of a wad of bodies moving on the bed. The men surrounded it from all sides. And, apparently, they penetrated into it from the same sides. I froze on the threshold and, probably, would have stood further with an open mouth if Seryoga had not pushed me inside.

It was as if I was jammed. - Don't be scared. Come with me. With these words, the woman got up and a picture of her whole body opened up to me. She had a very good chest, not hanging and flat, but rather poured, a small tummy, a wide female pelvis with a protruding booty.

What. It was starting to get on my nerves. So are you fucking him boy. Bill looked me straight in the face. There was a grin in his steel-colored eyes.