Can’t solve a riddle? The answer might lie in knowing what doesn’t work

Ever get stuck trying to solve a puzzle? 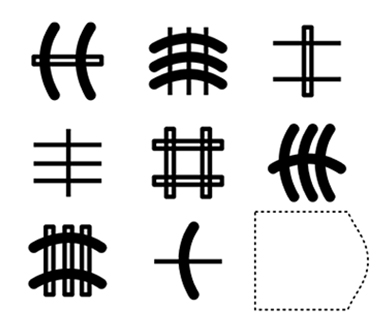 What goes in the last box? (The answer and more puzzles are below.)

You look for a pattern, or a rule, and you just can’t spot it. So you back up and start over.

That’s your brain recognizing that your current strategy isn’t working, and that you need a new way to solve the problem, according to new research from the University of Washington. With the help of about 200 puzzle-takers, a computer model and functional MRI (fMRI) images, researchers have learned more about the processes of reasoning and decision-making, pinpointing the brain pathway that springs into action when problem-solving goes south.

“There are two fundamental ways your brain can steer you through life — toward things that are good, or away from things that aren’t working out,” said Chantel Prat, associate professor of psychology and co-author of the new study, published Feb. 23 in the journal Cognitive Science. “Because these processes are happening beneath the hood, you’re not necessarily aware of how much driving one or the other is doing.”

Using a decision-making task developed by Michael Frank at Brown University, the researchers measured exactly how much “steering” in each person’s brain involved learning to move toward rewarding things as opposed to away from less-rewarding things. Prat and her co-authors were focused on understanding what makes someone good at problem-solving.

The research team first developed a computer model that specified the series of steps they believed were required for solving the Raven’s Advanced Performance Matrices (Raven’s) — a standard lab test made of puzzles like the one above. To succeed, the puzzle-taker must identify patterns and predict the next image in the sequence. The model essentially describes the four steps people take to solve a puzzle:

At each step, the model evaluated whether it was making progress. When the model was given real problems to solve, it performed best when it was able to steer away from the features and strategies that weren’t helping it make progress. According to the authors, this ability to know when your “train of thought is on the wrong track” was central to finding the correct answer.

The next step was to see whether this was true in people. To do so, the team had three groups of participants solve puzzles in three different experiments. In the first, they solved the original set of Raven’s problems using a paper-and-pencil test, along with Frank’s test which separately measured their ability to “choose” the best options and to “avoid” the worse options. Their results suggested that only the ability to “avoid” the worst options related to problem-solving success. There was no relation between one’s ability to recognize the best choice in the decision-making test, and to solve the puzzles effectively.

The second experiment replaced the paper-and-pencil version of the puzzles with a shorter, computerized version of the task that could also be implemented in an MRI brain-scanning environment. These results confirmed that those who were best at avoiding the worse options in the decision-making task were also the best problem solvers.

The final group of participants completed the computerized puzzles while having their brain activity recorded using fMRI. Based on the model, the researchers gauged which parts of the brain would drive problem-solving success. They zeroed in on the basal ganglia — what Prat calls the “executive assistant” to the prefrontal cortex, or “CEO” of the brain. The basal ganglia assist the prefrontal cortex in deciding which action to take using parallel paths: one that turns the volume “up” on information it believes is relevant, and another that turns the volume “down” on signals it believes to be irrelevant. The “choose” and “avoid” behaviors associated with Frank’s decision-making test relate to the functioning of these two pathways. Results from this experiment suggest that the process of “turning down the volume” in the basal ganglia predicted how successful participants were at solving the puzzles.

“Our brains have parallel learning systems for avoiding the least good thing and getting the best thing. A lot of research has focused on how we learn to find good things, but this pandemic is an excellent example of why we have both systems. Sometimes, when there are no good options, you have to pick the least bad one! What we found here was that this is even more critical to complex problem-solving than recognizing what’s working.”

Co-authors of the study were Andrea Stocco, associate professor, and Lauren Graham, assistant teaching professor, in the UW Department of Psychology. The research was supported by the UW Royalty Research Fund, a UW startup fund award and the Bezos Family Foundation.

Can You Solve These Riddles Without Looking At The Answers? (53 Pics)

"Riddle me this, riddle me that, what eats bamboo and looks like a cat?" A bamboo-eating cat of course! If you didn't get that one, then you're seriously going to struggle with these hard riddles. Riddles are not only for Sphynxes, guarding the Pyramids but also for humans, who love brain teasers. Also, they are a great way to silence your kids for a couple of hours, if you have them.

These funny riddles come from the website Propensity For Curiosity, and they're tough enough to test the resolve of even the most experienced conundrum crackers. So get comfortable, take the phone off the hook, limber up those mental muscles and get ready to concentrate - you'll find some of the best riddles for adults in this list. And, no cheating!

P.S.: Those are some hard riddles to solve, so if you're really stumped then you can click on the picture to find the answer.

This is a solution to The Doodle Problem Is a Lot Harder Than It Looks. Can You Solve It?, part of our Riddle of the Weekseries.

The Doodle Problem Is a Lot Harder Than It Looks. Can You Solve It?

A lot of trial and error is needed, and, although there are ways to help limit the set of possibilities, there isn’t a surefire method of arriving at a solution in a reasonable amount of time with a pen and paper.

To start with, we might notice the first two digits make the number 98, which is quite close to 100. So, if we can add and subtract the rest of the single digits to make 2, then we’ll have 100. In fact, there are eight ways to do this:

But we can do better—we can make 100 with fewer than 7 pluses and minuses. Here’s one way to make sure we find all possibilities: Use a computer simulation. Each pair of digits can be connected by either nothing, a plus sign, or a minus sign. Since there are eight paired connections, there are 3^8 = 6,561 possible combinations of pluses and minuses. I simulated each one of these combinations to determine which sum to 100.

The simulation unearthed that there are seven other ways of making 100:

The bolded solution is the winner. It uses only four pluses and minuses!

Laura FeivesonLaura Feiveson is an economist for the government, a storyteller, and a lifelong enthusiast of math puzzles.  She lives in Washington, DC with her husband and two daughters.

This content is created and maintained by a third party, and imported onto this page to help users provide their email addresses. You may be able to find more information about this and similar content at piano.io

Solution to the Riddle

How did I solve it?

Well, we know from examining the clues and the question that:

Well, we know there are five houses. We'll assume they're all in a row, and are numbered from left to right. We know the Norwegian is in the first house:

We also know the owner of the yellow house smokes Dunhill, and that the Norwegian has a neighbor with a blue house (the Norwegian only has one neighbor, to the right.)

The man who keeps horses lives next to he man who smokes Dunhill; so the horse owner lives in the blue house. The center house's owner drinks milk, the green house's owner drinks coffee, and the green house is to the left of the white house. Since we know the left two houses are the yellow and blue houses, the only position for the green and white are green as the fourth and white as the fifth, since the middle (third) drinks milk and the owner of the green house drinks coffee. The middle house has to be red, and therefore is the Brit's. So now this is what we know:

The owner who smokes BlueMaster drinks beer; since we know what houses #3 and #4 drink [and neither are beer] and we know what house #1 smokes [and its not BlueMaster], the only possibilities are houses #2 and #5. Keep this information in mind. Since it is evident house #1 cannot drink beer (only house #2 or #5 can), the only possible beverages for house #1 are water and tea, but since the Dane drinks tea, house #1 drinks water. The man who smokes Blends lives next to someone who drinks water; the only house next to #1 (the water-drinking house) is #2. The man who smokes Blends lives next to the one who has cats; so the cat-house is #1 or #3.

The only possibility for house #3's smokes is Pall Mall; all of the others are taken. We know that whoever smokes Pall Mall raises birds; so house #3 raises birds, and house #1 therefore has cats, since the only houses which could have had cats were #1 and #3, and #3 has been eliminated.

The only remaining pet is the fish, which must be owned by the German. We now know who owns the fish, and have solved the puzzle.

The completed matrix of data is as follows:

I am 43 years old, as you understand, there is no husband. - She introduced herself. - I. I am Evgeny, Zhenya.

11 EASY CRIME RIDDLES WITH ANSWERS EVERY ADULT FAIL TO SOLVE

After eating and washing, the overseer entered the cell. - Well done, Kid, you beat this lazy whore very well. Now, you bastard, I will beat you.

Vetal even slightly stroked him. Vika, noticing this, put her hand on his testicles and began to caress them. - Vic, Masha started, but looking first at Vetal, then at me, she fell silent.