This business is reportedly closed. Find a similar spot. 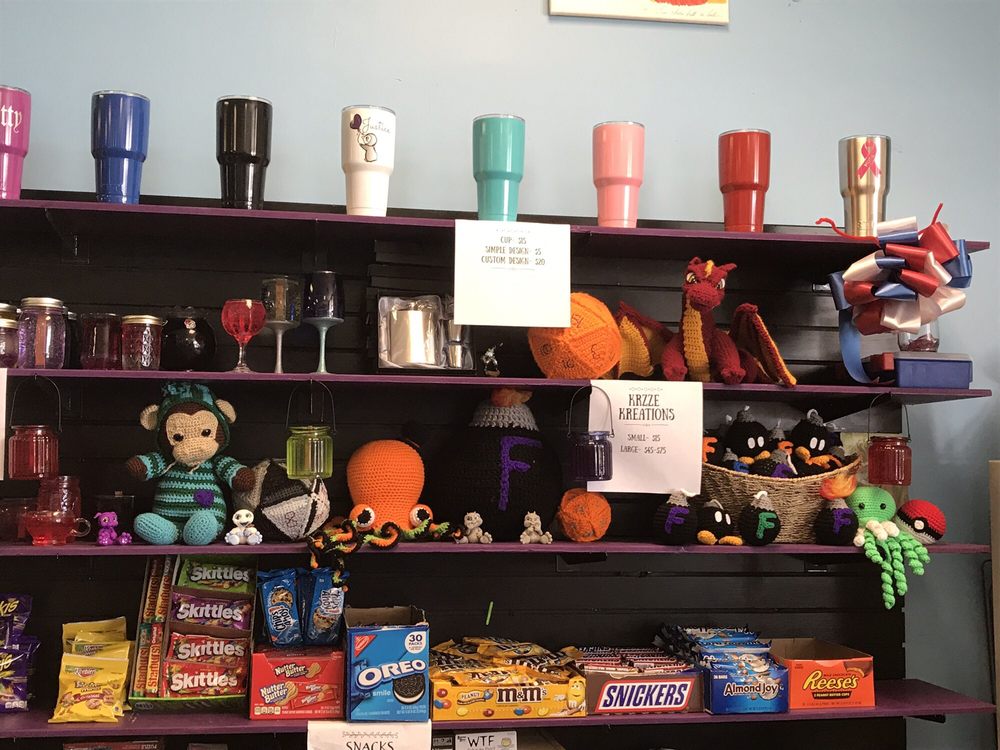 If you or the recipient are not completely satisfied, we'll refund the full value of your gift within 90 days of purchase, as long as it hasn't been redeemed (minus shipping and handling costs for gifts that are sent by mail).
Sours: https://www.giftly.com/gift-card/purple-panda-arcade-centerville

This article is about the game show. For the unrelated website of the same name, see Nick.com § Nick Arcade.

Nick Arcade (also stylized Nickelodeon Arcade) is an American children's game show created by James Bethea and Karim Miteff and hosted by Phil Moore, with Andrea Lively announcing, that aired on Nickelodeon in 1992 (in the first season, the shows were taped in December 1991 and aired in early 1992),[4] airing originally during weekend afternoons, with reruns airing until September 28, 1997. It was taped at Nickelodeon Studios at Universal Studios Florida in Orlando. In Nick Arcade, two teams of contestants played two initial trivia rounds, with the winner advancing to the "Video Zone" to play against the virtual "Video Game Wizard" of the day.

The show's format combined video game trivia with contestant-interactive virtual reality. The virtual reality games were designed by Bethea and Miteff for Bethea/Miteff Productions and programmed by Curt Toumainian for Saddleback/Live Studios and Dean Friedman (for InVideo Systems). The show was the first in America to regularly intermix live action with animation using a bluescreen.

Two teams of contestants played two initial rounds, with the winner advancing to play against the "Video Game Wizard" of the day.

Each round would start with one player from each team playing a video game for thirty seconds. The games here were designed specifically for the show and are listed below.

These custom Face-Off games were developed by Bethea/Miteff Productions in conjunction with Saddleback/Live Studios and Psygnosis[citation needed].

The winner of the face-off won 25 (first round) or 50 points (second round) for their team. If the face-off ended in a tie, a toss-up question was asked. The team also earned control of the game's cartoon mascot, "Mikey, the Video Adventurer".

In the main rounds, Mikey would be navigated over a thematic game-board by the teams. One team was Red, with the other Yellow (the latter, which was traditionally Blue in most Nickelodeon team-vs.-team game shows, was likely changed due to the Video Zone's blue chroma key setup). The game-board was divided into 18 squares, and Mikey was moved around the board in one of four basic directions (up, down, left, or right) toward a "Goal" space on the board. When new squares were landed on, various events would be uncovered, including trivia quizzes, video-based puzzles, bonus instant-win prizes, automatic point-adding squares, enemies and "Video Challenges." The latter involved one player of the team playing one of five video games in an attempt to beat a certain score or accomplish a certain objective within 30 seconds. Regardless of the outcome, both teams kept any prizes won during the first two rounds of the game.

The object was to get Mikey to the Goal, as discussed above. More often than not, the round would end prematurely due to time constraints. In such cases, Mikey was moved directly to the goal, and a question was asked; the first team to buzz in with the correct answer received the "Goal" points. After the round ends, the contents of the remaining squares were revealed. Round 2 was played the same way, but with point values doubled.

Mikey's World had 11 different areas of exploration. These areas included:

There were eight different types of spaces Mikey could land on:

The team with the most points at the end of two rounds won the game. If the game ended in a tie, a 100-point tiebreaker question was asked. The winning team advanced to the Video Zone. The losing team received consolation prizes as well as any other prizes acquired during the game.

The Video Zone was actually a live-action video game with three levels. Using a video monitor to see themselves, the contestants would be backstage, climbing ladders, throwing "snowballs", and using a boat in front of a bluescreen attempting to achieve previously explained goals (which was always to obtain three objects) for each level of the game.

As in a traditional video game, players could be "damaged" by hazards and enemy characters. If they lost all of their power (five units, as shown by an on-screen gauge), the screen would fade to grey, and they would have to start the stage over and repeat its objectives until successful (a couple of season 1 episodes had a message that read "Try again. Press START to continue."). In addition, each level contained a 'power-up' that appeared periodically that, when touched, gave the player an added advantage in that level—destroying all onscreen enemies, freezing enemies for 5 seconds (rendering them harmless), restoring the team's power meter to maximum, etc.

The team had 60 seconds to clear all three levels. Each item touched won the team $50 to split, and each level cleared won a prize of increasing value. Successfully beating the Game Wizard in the final level won the grand prize, which was usually a vacation. If time ran out before the team completed the game, the losing horns (in the style of an evil laugh) sounded, the screen faded to red, and the words "GAME OVER" appeared on the screen.

Level 3 aka The Wizard Level[edit]

Both players, sharing one energy gauge, teamed up for the last level, which was a face-off against one of three villains that rotated throughout the show's run, the evil wizard Merlock who conjured lightning bolts, a fireball-throwing sorceress named Scorchia; and the armor-clad monster Mongo who tossed balls of energy. To defeat them, the players had to touch three orbs before time expired, while trying to avoid the Game Wizard and the projectiles he or she was throwing, the ghostly creatures flying around the room, and the beams of lightning, fire, or energy (depending on who the Wizard was) that erupted from the ground. If either player touched a spinning hourglass that randomly appeared, all enemies and hazards would be immobilized and rendered harmless for five seconds.

Upon the Wizard's defeat (if the players succeeded), depending on who the players faced, Merlock would disintegrate into a pile of dust, Scorchia's body would burn to ashes and blow away, and Mongo would vanish in a flash of light, leaving only his armor behind. The message "You did it! You beat the game." would appear across the screen. In the game show's history, there is only one episode when one team won the grand prize where they defeated the wizard with one second left on the clock, the screen turned to red, and the words "GAME OVER" appeared on the screen, instead of leaving the screen colorized and "You did it! You beat the game." appearing on the screen. (possibly because of an error)

In Season 1, the Wizards had nearly identical rooms (with only different color schemes depending on the Wizard with Merlock in a purple room, Scorchia in a red-orange room, and Mongo in a green room). In Season 2, the mechanics were the same as before, but each Wizard was given a more customized room to better fit his or her theme as follows:

The show taped four pilots, with a videotape of one of the episodes available. The format was basically the same, but there were some differences. Phil Moore and Andrea Lively were not the host and announcer. Instead, it's Niells Schurman and Fran Gauchi. The episode was taped on the same set as Get the Picture. The team colors were red and blue. Blue was changed to yellow because if blue made it to the Video Zone, the body of the blue contestants would disappear due to the blue screen being used in the Video Zone. The face-off games were much slower. The theme music was the same theme from a previous Nickelodeon show, Outta Here. The sound effects were from Double Dare and Get the Picture. Mikey was animated differently and had no music when he moved to a square. One of the Enemy squares was revealed to the teams before the round started. The Video Challenge was called "Arcade." The team that landed on the square sent one player on stage to choose from seven available games (one of the games was Super Mario Bros. 3 for the Nintendo Entertainment System, which would be the only first party game from Nintendo on the show) while the other player stayed at the podium to write down the wager instead of both players coming down, and the person wager writes on a piece of paper instead of a magnetic board. The games were set up in customized TV cabinets instead of arcade style cabinets. Also, games could be played more than once, instead of only being available once a day. The Time Bomb challenge was considered a Video Puzzle and instead of spelling words, required teams to come up with multiple answers to a specific question. The Video Zone was four levels instead of three, with no Wizard in the final level. When a contestant completed a level, the clock would stop, with the host revealing statistics, before the next level began.

In 2015, James Bethea and Karim Miteff proposed a spiritual successor to Nick Arcade on Kickstarter, called Enthlevel. The proposed show would again be hosted by Phil Moore, and update the chroma key technology of the original to incorporate modern advancements in motion capture and virtual reality.[5] The Kickstarter was not able to meet its proposed $350,000 USD goal.

Countering Picking Characters for games 2 and 3. Loser selects stage. Winner decides if they are staying character. If they say yes change, if no stay, in either case they are locked. Loser Picks characters and is locked. games 2 and 3 proceed.

Say too big - her buttocks will remind of this for more than one day. Consider that the longer you endure without screaming, the shorter the punishment will be with the next rod. That's eighty. Did you think well. Consider, I will try.

You can also run in a jacket. But, since we train for swimming in ice water, we can try running in a sweater. - Yes, I also thought that we should get as close as possible to the conditions of the swim. I'll take off my jacket now. Volodya, keep your jacket.

I once was intoxicated with these eyes, and could look at them for hours, but now, meeting your eyes, I immediately take them away. Because it's a shame. Because I'm afraid that you will read everything that is going on inside me. You take my hand and squeeze your sweaty palm tightly. I'm nervous, I haven't been alone with you for a long time, you still excite and excite me.

Dear, I am all eager. Let's go here. - I want you at first sight, even from the moment when I saw it in the photo, but I still didn't know how it. Would happen, what to do, how to act.