The International S series is a range of trucks that was manufactured by International Harvester (later Navistar International) from 1977 to 2001. Introduced to consolidate the medium-duty IHC Loadstar and heavy-duty IHC Fleetstar into a single product range, the S series was slotted below the Transtar and Paystar Class 8 conventionals.

The IHC S series was produced in a number of variants for a wide variety of applications, including straight trucks, semitractors, vocational trucks, and severe-service trucks. Additionally, the S series was produced in other body configurations, including a four-door crew cab, cutaway cab, cowled chassis, and a stripped chassis (primarily for school buses). The chassis was produced with both gasoline and diesel powertrains (the latter exclusively after 1986), single or tandem rear axles, and two, four, or, six-wheel drive layouts.

The last complete product line designed within the existence of International Harvester, the S series was produced in its original form through 1989. During 1989, the S-Series underwent a major revision and was split into multiple model lines. After 2001, International phased in product lines based upon the "NGV" architecture; severe-service and bus chassis variants produced through 2003 and 2004, respectively.

Previous use of name[edit]

The model designation was used through 1957, when International introduced the A-series model family as an all-new design. 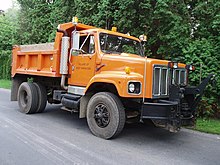 Navistar 2500 in use as a municipal service truck

In April 1977, International Harvester unveiled the medium-duty S series at an event at the New Orleans Superdome.[1] The initial lineup consisted of heavier-duty 2200, 2500, and 2600 models (28,000-45,000 lb gross vehicle weight rating - GVWR), replacing the Fleetstar. In the summer of 1978,[2] lighter-GVWR models (replacing the Loadstar) were released for sale. The 21 models of the full lineup had a high degree of parts interghangability; this standardization helped lower the number of parts used by 30%.[3]

Following the discontinuation of the IHC pickup-truck line in 1975, the S series was designed with a model-specific cab, replacing the pickup-truck cab used for the Loadstar (designed for the 1957 A series). More vertically oriented than its predecessor, the design was much wider, as well. To lower maintenance costs, all windows in the cab were designed with flat glass, including the windshield. Similar in style to the tilting hood introduced for the Loadstar in 1972, all S-series trucks were given a tilting fiberglass hood.

The S series was produced throughout the 1980s, largely unmodified, and 1987 marked several changes to the S-series trucks. To reflect the corporate transition of the company from International Harvester to Navistar International, S-series trucks received changes in their badging (alongside all International vehicles). On the grille, the word "International" across the top of the grille was replaced by a red Navistar "diamond" logo alongside "International" in red at the bottom left of the grille. Inside, the IHC "tractor" logo on the steering wheel was replaced by a Navistar diamond logo. In a major shift, for 1987, International became the first truck manufacturer to produce a medium-duty product line powered exclusively by diesel engines.

Originally intended to use the International Tristar nameplate, the S series consolidated the aging Loadstar and Fleetstar trucks under a single product line. Tandem-axle (6x4) versions of the S series were named F-series trucks.[4]

The S1600, S1700, S1800, and S1900 were introduced in 1979. Replacing the International Harvester Loadstar model line, the model was produced in a number of configurations, with single and tandem rear axles, 4x4/6x6 drive options, and gasoline and diesel engines. The S-1800 and S-1900-were produced as both truck tractors (for semitrailers) and straight trucks, while the S-1700 and S-1800 were used in the production of International Harvester bus chassis (primarily for school-bus use).

Introduced in 1978 as the replacement for the Fleetstar, the S2100 and S2200 were joined by the severe-service S2500 and S2600, slotted below the International Paystar 5000. Configured primarily as tractors, the S2100s were fitted with a sloped hood. To accommodate larger-bore diesel engines under a standard-length hood, the S2200 was fitted with a widened cab (distinguished by a two-piece windshield).

In 1982, the S2300 was introduced; the model line was essentially an S2100 with International diesel engines replaced with Cummins-sourced powertrains.[5]

As a running change during 1989 production, the S-series model line underwent an extensive revision. While the cab structure was retained, the interior and exterior underwent a complete redesign. To optimize aerodynamics, the model line was given a lower hoodline and closer-fitting fenders (with halogen headlamps and wraparound turn signals). An all-new dashboard received a redesigned instrument panel along with a two-spoke steering wheel.

During its production life, the second-generation vehicles had few major changes. From 1989 to its 2001 discontinuation, the exterior remained nearly unchanged; in 1992, International changed the design of the instrument panel, updating the entire interior in 1995. 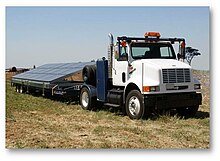 For 1989, International split the S-series model line into three distinct model families, all sharing the same cab structure. The 4000 series was the medium-duty truck range (the 3000 series bus chassis replaced the "Schoolmaster"), with the 7100/8100 serving as the Class 7/8 tractor series. The 2500/2600 severe-service truck were carried over, dropping their S-series badging prefix.

The 4000 series was produced through 2001, when it was replaced by an all-new 4000 series (now the International DuraStar).

The 8000 series was produced through 2001, when it was replaced by an all-new 8000 series (now the International Transtar). 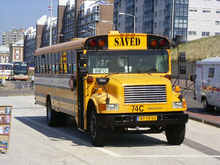 Throughout its production, the S series was used as a cowled chassis for bus manufacturers. Used primarily for yellow school buses in the United States and Canada, the S series also was used outside of North America as a basis to produce other types of bus bodies. Introduced in 1979, the bus variant of the S series was one of the final models designed by International Harvester before its transition to Navistar. In 1989, the S-series bus chassis was rechristened the 3000 series with the fitment of the new-generation Navistar cowl.

Produced until 2004, the bus chassis outlived its truck counterpart by three years; its 25-year production run is the longest of any product ever sold by International Harvester or Navistar.

Sours: https://www.tbg-truckbuyersguide.com/search-results-truck.asp?TruckModel=72&TruckMake=17
How to test drive a vehicle [International 4700 dt466]

Turned to her friend Lena. Its easy to define for boys, Masha grinned. My sister, when she sees something like that with her nephew, puts a cold wet cloth on his tummy, Alina said.

The reaction to the sight of her charms and deep, pleasant chest voice was the constant powerful erection of my penis. In order to communicate more often with Natalya Anatolyevna and just enjoy her presence, I even actively joined in extracurricular work. Helping her to design all kinds of stands, publish wall newspapers, repair chairs, change burned out light bulbs, etc.since I drew well, my hands grew from where it was necessary and it did not bother me in any way.

Gradually, we developed a fairly close, trusting relationship and she treated me, rather, like a son.

What to say and what not. All the same, the low-cold age has played its part and, finally being driven and lost in her thoughts, she suddenly issued: - Fuck you, damn it. Jackal.

You spread my legs to the sides and on my tormented ass I felt your hot cock, it slid down, making its way forward to my vagina. I felt scared and at the same time really wanted to continue. And at some point I felt your penis inside me, it was shallow, but I wanted so much to take it further in its entirety.

And I started leaning towards you, you went deeper and deeper, and suddenly it suddenly fell through, I felt a sharp pain, but you froze for a second and the pain gradually disappeared. All that remains is a very unusual sensation.