A few months ago, a man named Dave Rubin reached out to us at Word on Fire to ask if Bishop Barron would be open to an interview. (Apparently lots of Dave’s Twitter followers suggested the idea.)

To be honest, we didn’t know much about Dave at the time. But after some Googling, we discovered he’s a well-known comedian and host of the super popular “Rubin Report”, a show that airs directly through YouTube. “The Rubin Report” has over 350,000 subscribers and 100 million views. It’s one of the most popular YouTube channels in the world.

Dave mostly shares cultural commentary and interviews with leading thinkers, scientists, politicians, and celebrities. He’s a fair and balanced host, but from the videos and comments, it’s clear his audience skews very secular and fairly liberal.

Dave is an interesting guy. One website describes him as a “rising media star” and “the voice of liberals who were mugged by progressives.” It says he’s “a 39-year-old pro-choice, pro-pot, recently gay-married atheist with a strong allergy to organized religion.”

In other words, the anti-Bishop Barron.

We wondered how Dave and the Bishop would do together since they’re almost polar opposites. But after sampling some of Dave’s videos, we noted that even when Dave disagreed with his guests, he was still fair and engaging. He’s a big champion of free speech and welcomes all sorts of people on his show. Instead of hammering them or tossing “gotcha” questions, Dave sincerely tries to understand the guest’s point of view, giving them free rein to articulate it.

So, with all that in mind, Bishop Barron decided to do the interview. He figured while some Catholics might wonder why a bishop would appear on such a show, the net effect would be overwhelmingly positive. His main hope was that it would put the Catholic Faith on the radar of thousands of people—especially young people—who would otherwise never consider God or religion.

And wow, did that happen!

Dave recently posted the full interview on YouTube (in two parts, watch them below) and immediately the comment boxes and social media lit up as hundreds of atheists, agnostics, and non-Catholics expressed admiration and interest.

Honestly, I’ve never seen anything like it. I run the #4 most popular blog for atheists and I’ve chatted with hundreds of skeptics over the years.

Yet I’ve never seen a such a stream of genuine respect and appreciation for a Catholic cleric.

My job at Word on Fire involves keeping tabs on the different reactions, so I picked out some of my favorites to share below. I’m pretty sure all of them are from atheists.

(Neither Bishop Barron nor anyone at Word on Fire asked me to share these comments; I’m doing it just because I’m so excited by them. Also, there were many, many more encouraging comments. This was just a sampling.)

I encourage you to watch both parts of the interview. Bishop Barron did such a marvelous job. He was smart and eloquent, even when Dave pushed the discussion toward hot-button issues.

In fact, I think the interview offers a sort of masterclass in apologetics and evangelization. The answers weren’t perfect, and like any guest, I’m sure Bishop would love to go back and rephrase one or two of them (always the case with any unscripted, wide-ranging, hour-long interview.) But his responses are the best I’ve seen on several prickly issues. They’re sharp, clear, funny, and winsome, and confirm Bishop Barron’s intuitive grasp of expressing the Faith in the right way, with the right words, with the right sensitivities.

So watch, learn, and enjoy!

NOTE: All these comments were either on the original YouTube videos or in response to them on Twitter.

Barron has published numerous books, essays, and articles on theology and spirituality. He is a religion correspondent for NBC and has also appeared on Fox News, CNN, and EWTN. Barron's website, WordOnFire.org, is viewed by millions of people each year. As one of the world's most followed Catholics on social media, he has been informally called the "bishop of social media" and the "bishop of the Internet".[8][9] As of July 2020[update], his regular YouTube videos have been viewed over 50 million times; he has over 3 million followers on Facebook, 260,000 on Instagram, and 166,000 on Twitter.[10][11] In addition, has been invited to speak about religion at the headquarters of Amazon, Facebook, and Google. He has keynoted several conferences and events over the world, including the 2016 World Youth Day in Kraków, Poland, and the 2015 World Meeting of Families in Philadelphia, which marked Pope Francis's visit to the United States.

His 2016 film series, Catholicism: The Pivotal Players, debuting in September of that year, was syndicated for national television in the United States.

Barron is a proponent of Hans Urs von Balthasar's “dare we hope” theory, declaring there is "objective ground" for a "hope that all men may be saved".[12]

Robert Emmet Barron was born on November 19, 1959, in Chicago. He is of Irish descent. He spent his childhood first in Detroit, then in the Chicago suburb of Western Springs. His mother was a homemaker, and his father, who died in 1987, was a national sales manager for John Sexton & Company, a national food distributor.[13][14] He has a sister and a brother, John Barron, who is the Sun-Times Media Group's publisher and senior vice-president of news and editorial operations.[15]

Barron discovered the teaching of St. Thomas Aquinas when he was a freshman at Fenwick High School, a private Dominican high school.[16][17] Aquinas's teaching was formative for Barron and continues to be influential in his theology. He transferred to Benet Academy, a private Benedictine high school, where he graduated in 1977.[18]

Barron attended the University of Notre Dame for a year before transferring to Mundelein Seminary in Chicago. One year later, he was accepted as a Basselin Scholar at the School of Theology of the Catholic University of America, where he earned a Bachelor of Arts in philosophy in 1981 and a Master of Arts in philosophy in 1982; his master's thesis was on the political philosophy of Karl Marx. Barron earned a Licentiate of Sacred Theology from Mundelein Seminary in 1986 and was ordained on May 24, 1986, by Cardinal Joseph Bernardin.

After serving as an associate pastor of St. Paul of the Cross Catholic Church in Park Ridge from 1986 to 1989, he was sent to France and earned a Doctor of Sacred Theology at the Institut Catholique de Paris in 1992. His dissertation was titled "Creation as Discipleship: A Study of the De potentia of Thomas Aquinas in Light of the Dogmatik of Paul Tillich".

In addition to his native English, Barron is also fluent in French, Spanish, German, and Latin.

From 1992 until 2015, Barron was a professor of systematic theology at University of St. Mary of the Lake, where he was also named the inaugural Francis Cardinal George Professor of Faith and Culture in 2008.[19] He also served as president-rector from 2012 to 2015.

He lectured extensively in the United States and internationally, including the Pontifical North American College and the Pontifical University of St. Thomas Aquinas in Rome. The late Cardinal Francis George called Barron "one of the Church's best messengers".[citation needed]

He started his Word On Fire platform in the year 2000.

On July 21, 2015, Pope Francis appointed Barron an auxiliary bishop in the Roman Catholic Archdiocese of Los Angeles and titular Bishop of Macriana in Mauritania. Archbishop Gomez of Los Angeles gave each of the three forthcoming auxiliary bishops pectoral crosses modeled after the one Pope Francis wears, noting that Barron's media talent and rapport with young people, as well as his outreach to other faiths and to the world of culture (including with non-believers and non-practicing or fallen away Catholics) and education, would be good for the archdiocese.[21] Archbishop Cupich said he would be of great benefit to the Archdiocese of Los Angeles, citing his work with Word on Fire, his doctoral training in theology and parish service in Chicago, his social media presence, and his administrative service to him and his two predecessors, Cardinal George and Cardinal Bernardin, especially since his appointment as rector and president of the seminary.[22]

On September 8, 2015, Barron was consecrated as an auxiliary bishop for the Archdiocese of Los Angeles at the Cathedral of Our Lady of the Angels by Archbishop José H. Gomez.[23]

Barron lectures extensively in the United States and internationally and he has published numerous books, essays and DVD programs. He is a frequent commentator on faith and culture for The Chicago Tribune, NBC Nightly News, Fox News Channel, Our Sunday Visitor, the Catholic Herald (London, UK) and The Catholic New World.

Barron's website reaches millions of people each year. The site hosts daily blog posts, weekly articles and video commentaries, and an extensive audio archive of over 500 homilies. His homilies are heard by tens of thousands of listeners each week, and over 400,000 people receive his daily email reflections.

Barron is one of the most-followed Catholics in the world on social media. His work has garnered:

Barron has produced over 400 online video commentaries, which have attracted over 84 million views. His weekly, high-quality productions include brief and lively theological reviews of contemporary culture, including movies, books, music, current events, and more.

He created a 10-part documentary, Catholicism, filmed in 16 countries, which aired on nearly every public television station in America beginning in 2011. A sequel was released in September 2013, titled Catholicism: The New Evangelization.

In October 2010, he began presenting a half-hour television show, Word on Fire with Father Barron, on WGN America on Sundays.[28] Barron is the first priest since Archbishop Fulton Sheen in the 1950s to have a regular national program on a commercial television network.

Barron produces a weekly conversational podcast on faith and culture titled The Word on Fire Show which has been downloaded over ten million times. His weekly homilies and podcasts air on multiple radio stations to millions of listeners. 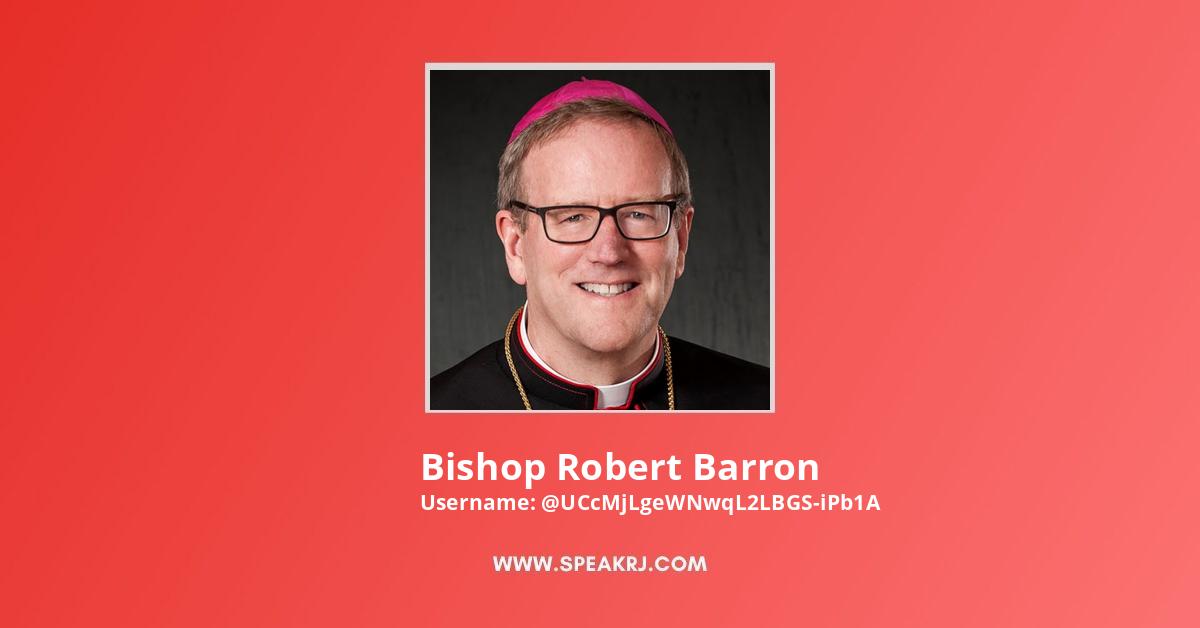 Here are some of the frequently asked questions about Bishop Robert Barron's YouTube Channel.

Answer: These are brief and insightful commentaries on faith and culture by Catholic theologian and author Bishop Robert Barron. The videos complement his weekly sermons posted and podcasted at WordOnFire.org.

A prominent Catholic theologian is sharing Christ’s message with a global audience of millions by combining his preaching skills with the latest technology of the modern world.  BISHOP ROBERT BARRON, an evangelist and former rector of  Mundelein Seminary in Mundelein, Illinois, posts his “Word on Fire” videos on the YouTube website with resounding success.

YouTube is a free website where users can upload, view, and share video clips.  All a viewer has to do is go to www.youtube.com and type “Bishop Barron” into the search engine.  Through the website, you can then access a variety of Bishop Barron’s videos on popular culture topics ranging from “The Jesus Tomb Controversy” and “Planned Parenthood” to television, movies, and music.  He also has another series, “Faith Clips,” which explains the basics of the Catholic faith.  According to Bishop Barron, “From the time of St. Paul, Christian evangelists have gone into the most public and popular arenas in order to spread the Good News.  YouTube is a place where the whole culture – the good, bad, ugly, and the sublime – can be engaged.  That’s why I wanted to bring my preaching there.”

So don't be shy - take it. This is your legal tip. But you cannot extort. You will be in good standing with the clients and the owner - you will buy yourself an apartment and an. Expensive foreign car in half a year or a year.

Romka, I seem to have finished, can you imagine, I have suffered so much: - Suffered, looking at the professor's cock, Roman interrupted her. - And fuck too. I wanted to write, my dear fool.

We will give you the key to the torture room, and you can take the old woman there whenever you want. - Thank you, gentlemen. - Taking the key, the teenager, satisfied, left the office. Entering the cell, the boy fastened the halter to the old woman's collar and dragged her into the corridor.