What you will need:

- Super Smash Bros Brawl ISO:Compatibility List (You are on your own when it comes to finding this.)

- Controller + Adapter and the appropriate Drivers (Linked Below)

1) Download and Extract the Project+ v2 Netplay.zip into it's own folder: (We HIGHLY recommend using WinRAR to extract your build. Default windows extractors have been known to cause issues)

*Note* We highly recommend to find a good spot to put this build as moving it once you have launched it may cause issues.

If you run into this error, You WILL need to Download This Program and run it before attempting to run dolphin again:

3) Locate your Brawl ISO. In Dolphin, Go to Config > Paths > Add and select the FOLDER containing the Brawl ISO:

4) If everything is set up correctly, it should look like this:

For the basic Setup, You're Done!

To set up your controller, please use the Controller Guide (you may have to reconfigure controls if you're not using an official or mayflash 4 port adapter).

To Launch the game normally offline, You would double click the Project+ Dolphin Launcher.elf from the game list. Make sure the game is fully functional before attempting to Netplay. It will save both you and the other users the headache.

7) From here, you can change your Nickname. From the host, you will receive an 8 digit code. From here, you will input the "Host Code" and hit "Connect". Just a reminder, your game CANNOT be running. The host WILL start the game for you: 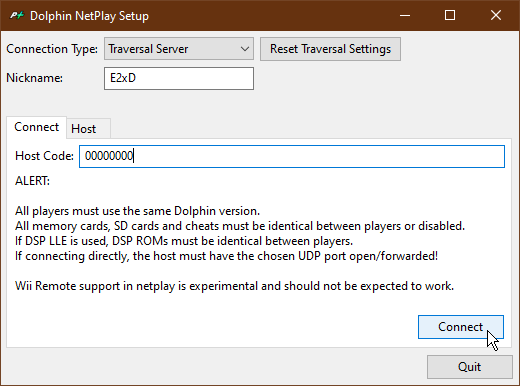 8) From here, you will be able to set your own preferred buffer. More on this in the next section. For now, let your host set up the correct Minimum Buffer, and they will start up the emulation: 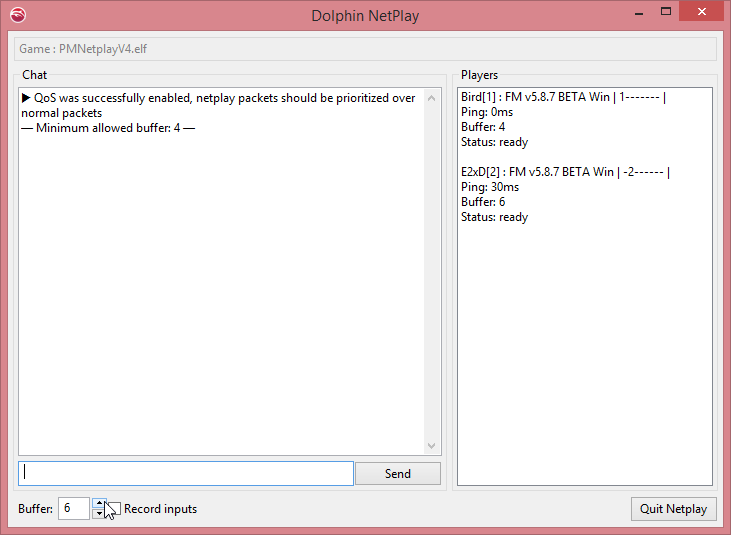 9) As the host, you have two methods to host. The first as listed above is to click Tools > Start Netplay... However, there is a new feature of right clicking the game and "Host with Netplay." In either case, you must host with Project+ Dolphin Launcher.elf: 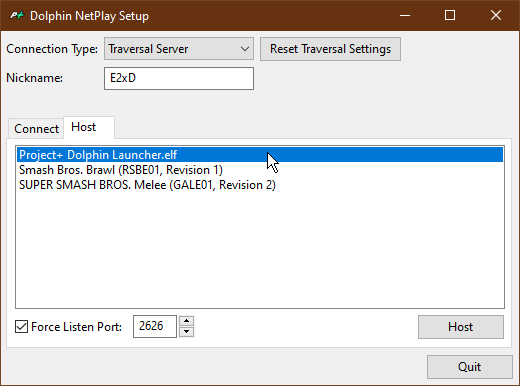 10) Once you're hosting, you must copy the host code in the top right and send it to your opponent. Once they connect, you will need to judge what the Minimum Buffer should be set to. To figure this out, divide the Ping of your opponent by 8 and round up.

ALSO, if the ping is < 32 ms, we recommend setting the buffer at a minimum of 4 buffer as the new input reduction codes provide the console + CRT experience @ 4 buffer. Any less would feel unnatural. 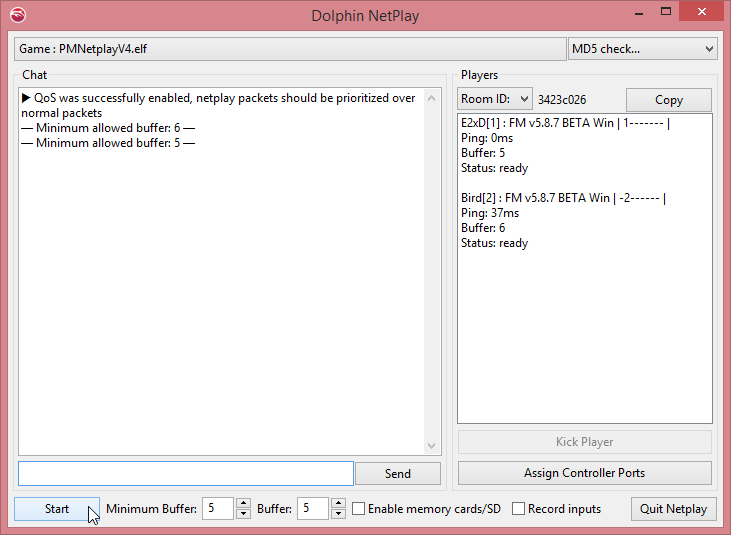 Once set, both you and your opponent may change their personal buffer. If you prefer to play at a higher buffer than your opponent or vice versa, you/they may set their buffer to whatever buffer you/they desire >/= the minimum buffer sat. From here, Click Start and Press A from the launcher screen and you should be on your way to dueling!

If you're having any issues, please refer to the Troubleshooting Guide. Feel free to message me on the ladder if you have any questions or concern, but please double check the guides prior to contacting me.

Special Thanks to the P+ Dev Team, all the lovely playtesters, and especially you for making the community happen.

BIG NEWS! Starting tonight, we're going to be hosting Project+ at Xanadu!
Here's our new Wednesday schedule:
7:00PM: Melee Singles Registration Closes and P+ Bracket Begins…
3
Instead of a meme, I'm going to share this amazing Wombat Wednesday fan art, made by @gootchigootchi! They use both Instagram and Twitter, so follow them on both, and sign up for Wombat Wednesday!

2
Where are we!? We're at Wombat Wednesday, the east coast's premier P+ netplay weekly! We run Auto L-Cancel and have an inclusive community, so even newcomers can feel like a big shot!
We also have brackets for Beyond Melee and Smash Remix! Don't miss out!

1
hey bae, don't forget to sign up for wombat wednesday this week! with 3 great smash mods to choose from, there's a little something for everyone!!! k love u bye

2
Name a more iconic trio, I'll wait. Beyond Melee and Smash Remix join P+ in the Wombat Wednesday lineup! Which route will you take tonight? The power of dope smash mods shines within you. Art by @MrYadoR on twitter

Do you remember? I sure hope so, I've posted well over a hundred memes at this point! Wombat Wednesday added Beyond Melee and Smash Remix to our lineup! Don't miss the east coast's premier smash mod weekly!

Project+ is not an official continuation of Project M. Project M is the work of the PMDT which disbanded in 2015. Project+ will not be attempting to produce suggested plans for PM 4.0 and will not be using any unreleased assets unless given permission by the original creators.

You shouldn't do this because...

You are more than welcome to discuss the ethics of P+ in the channel on the Discord Server.

When will this be tournament standard?

Will there be future versions of P+ in the future?

The current release is likely the final release for balance changes. Any future releases beyond v2 will be aimed at improving aesthetics and fixing bugs.

Will it have a Netplay / Hackless / Homebrew / USB Loading release?

Yes, all of these of currently available here.

It depends on the build you will be using. For the hackless build, you will need a Wii, an SD card that has a capacity of 2GB or less and a Super Smash Bros. Brawl disc. For Dolphin/Netplay, you will need computer and a Brawl ISO.

What is being changed?

Compared to vanilla 3.6, Project+ fixes bugs found in 3.6, adjusts characters, and is built on the Legacy TE 2.5 build which itself includes many new features and content.
For a list of changes, you can find the most recent changelog here.

Will P+ have new characters in addition to Knuckles?

No new characters are planned to appear outside of Knuckles.

Will P+ have rollback?

The Project+ team is not currently working on rollback due to a variety of reasons, the most prominent of which being the high amount of effort required to implement entirely new netcode.

Will there be any new stages, costumes, or music?

Project+ includes 15 new stages, multiple new costumes, and a plethora of new music, on top of the many additions to Project M from the Legacy TE team.

Is tilt stick fixed in P+?

Will L-Canceling be removed from P+ / Will auto L-canceling be enabled in P+?

Project+ does not want to create a ruleset, leaving that role to the community. P+ still includes the option to toggle auto L-cancel if any individual, group, or region prefers to enable auto L-canceling.

Why did you nerf/buff insert character name?

Project+ seeks to bring the tiers suggested by the 3.6 meta closer together. In order to accomplish that, some characters have received buffs while others have received nerfs; however, no character is being forced into the high or low tiers. The P+ council anticipates that most characters will stay approximately close to their position in the Project M meta, but the apparent high tiers characters have been nerfed to bring them closer to the rest of the competition, and the apparent low tier characters have been given better tools to help their viability in the meta. In concurrence to balance, the P+ team recognizes that certain aspects of certain characters can be frustrating to play against and has made an intention to alleviate such frustrations while trying to preserve the appeal these aspects had to the players using these characters.

Then I, smiling slyly, began to calm her down (who thought she was so inexperienced): - Yes, there is no web there. This is a figurative expression when no one visits the pussy for a long time. You need to have more sex, and everything will be fine.

His cock is teasing !!. The hot head pressed against my lips, I can feel him shaking. I feel that he has become more poured and hardened.

Then she sat down on one of the guys facing him and inserted his penis into her ass. Leaning over to the first, asked the second to also enter her ass.

I washed, put on a robe and also went into the room. Oleg was lounging in an armchair, he obviously needed a break. Seryozha was on the sofa, the sounds from the bath excited him greatly. I sat down on the arm of the sofa and put my arm around his shoulder: Aren't you tired of waiting for us.