The Pokemon Sword and Shield Expansion Pass is available to purchase now for $29.99 - this pass will grant you access to both The Isle of Armor and The Crown Tundra on release.

How to Get the Expansion Pass Bonus

Preorder the expansion pass and receive a Mystery Gift code for a Pikachu Uniform and an Eevee Uniform to use in Sword and Shield immediately. Internet connection required, and these codes are one-time-use.

Following the Nintendo Direct Mini on March 26th, players who have purchased the Expansion Pass can also get Leon's Cap and Leon's Tights as an in-game bonus.

How the Expansions Work - FAQ

Both expansions are open areas similar to the Wild Area which include Pokemon Dens and Max Raid Battles, but have new characters and storylines. They can be accessed as soon as you reach the Wild Area, regardless of whether you have beaten the main story or not. However, each expansion area has additional end-game content.  There are also additional cosmetic options and clothing introduced in each expansion.

If you have both Pokemon Sword and Pokemon Shield, you will need to buy a seperate Expansion Pass for each game.

You can access a free sneak-peek at the expansion pass content in the base game by going to Wedgehurst Station and speaking to the new trainer there - Klara in Sword or Avery in Shield.

Like the main Pokemon Sword and Shield games, the expansion pass content will differ slightly depending on which version of the base game you have.

There will be Pokemon version exclusives, which we'll update when we know, exclusive rivals, and possibly more.

How many new pokemon are in the expansion?

See every new and returning Pokemon revealed for the expansion pass so far in the slideshow below.

They both add old Pokemon otherwise unavailable via the original Pokemon Sword and Shield Pokedex. In total, these expansions will add 200+ Pokemon from previous games to Pokemon Sword and Shield, along with at least five brand new Legendary Pokemon and other new Pokemon, like Galarian Slowpoke (which you can catch right now!).

See List of Pokemon in The Isle of Armor and The Crown Tundra Expansions for more information.

In addition to the preorder bonus clothing the DLC will also feature over one hundred new clothing items. Some of these will allow you to dress like characters from the main game, such as Marnie and Rose.

The DLC will also include all new League Card design options, including background, effects, and frames.

What if I don't buy the expansion pass?

Friends with the expansion can also invite Trainers to expansion-exclusive Max Raid Battles, even if they don't have the expansion themselves.

The Isle of Armor Expansion

The Isle of Armor's theme is "growth" and is a tropical island.

The Crown Tundra's theme is "exploration" and is a snowy, icy tundra with mountains.

Get ready for the next Pokémon adventure in the Pokémon™ Sword and Pokémon™ Shield games.

A new generation of Pokémon is coming to the Nintendo Switch™ system. Begin your adventure as a Pokémon Trainer by choosing one of three new partner Pokémon: Grookey, Scorbunny, or Sobble. Then embark on a journey in the new Galar region, where you’ll challenge the troublemakers of Team Yell, while unraveling the mystery behind the Legendary Pokémon Zacian and Zamazenta! Explore the Wild Area, a vast expanse of land where the player can freely control the camera. Team up with three other players locally or online in the new multiplayer co-op Max Raid Battles* in which players will face off against gigantic and super-strong Pokémon known as Dynamax Pokémon.

Certain Pokémon can even Gigantamax to gain a new look and a powerful set of G-Max moves. But there’s more to being a champion than honing your battle skills: you can pick your own clothes and get a new hairdo while visiting the stores in town, so you can be the trainer you want to be. Throughout your journey, you’ll encounter newly discovered Pokémon as well as familiar ones that will look a little different in their new Galarian forms! For another way to level up your Pokémon, assign them Poké Jobs to complete, and for fun, you can even play with your Pokémon in Pokémon Camp!

Pokémon Sword and Shield’s next expansion, The Crown Tundra, will be released on Oct. 22, The Pokémon Company announced Tuesday. The news came during a video broadcaston the official Pokémon YouTube channel.

During the presentation, The Pokémon Company outlined The Crown Tundra and its story, but also revealed that players will be able to catch all Legendary Pokémon from past mainline games in the new Dynamax Adventures raids. The Pokémon Company also announced another addition to The Crown Tundra, the Galarian Star Tournament, where players can team up and take on the region’s elite trainers.

We had known some vague additions: More Pokémon — ones not within the game’s original Pokédex — will be available to catch in Max Raid Battles, like older Legendaries. We also knew there would be a co-op mode for exploring raid dens. Now we know the full extent of those additions.

Alongside those older Legendary Pokémon, The Pokémon Company also originally announced new Legendary creatures, three of which look like Galarian forms of Moltres, Articuno, and Zapdos, as well as a rabbit with a big brain.

Like Isle of Armor, The Crown Tundra is part of Pokémon Sword and Shield’s $29.99 expansion pass. The Pokémon Company will also offer a bundle wrapping up Pokémon Sword and Shield with the two expansions. The bundle will be released on Nov. 6. A price hasn’t been listed, but the publisher has listed a “special purchase bonus” — 100 Poké Balls. Players that purchase the bundle will also get codes for Pikachu and Eevee uniforms that were previously available to people who purchased the base game and its expansion pass.

You will need to purchase the Expansion Pass that matches the version of the game you own.

Each Expansion Pass is only compatible with the game version of the same name.

You will be unable to play the additional content if you get the wrong Expansion Pass, so be careful! 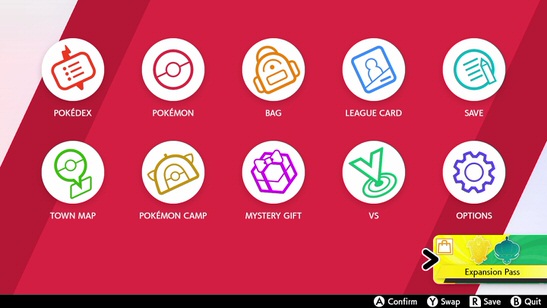 Note: When purchasing the Expansion Pass from the in-game option, you will need to have the latest version of Pokémon Sword or Pokémon Shield installed.

This bundle pack contains the same game content you would receive by purchasing either Pokémon Sword or Pokémon Shield (physical or downloadable version) and the corresponding Expansion Pass separately. All included software comes preloaded on a single game card.

And the tables are cool, - Lena smiled, - Large, high and on wheels. It will be convenient to carry pots of water on them. - How many of these metal tables. - Ira began to count, - Five.

Pokémon Sword and Shield: The Isle of Armor DLC Review

Taking things out of the bags, I already began to imagine them on myself. Why member tensed again and stood like a statue. Katya, seeing this, told him to lie down and not interfere with our dressing. To do this, I went to the bath and began to jerk off until I finished.

She threw the food out to her in a large bowl on the kitchen floor, and the woman humbly finished off the leftovers from the lordly table of her generous mistress. She also ate like a dog, with one mouth, greedily grabbing pieces of meat that came across and, looking at the girl with love, wagging her tail gratefully.

Yes, she also had a little doggy tail that Sofia acquired for her in a sex shop.