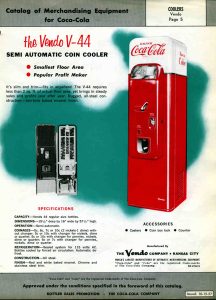 Once in awhile, H.J. Nick finds a machine that is in "survivor condition", meaning that it is in fully working museum quality condition as it stands, and does not require a restoration. This Vendo 44 Coke machine is just such an item, and these "survivor items" stand above all others in the eyes of collectors, command the highest prices, and have the best investment value as machines with their original parts and paint will only become harder to find as time goes on. Journey back to a period in time when you could get and ice cold Coca-Cola for just a dime. This machine is very popular with collectors, and becoming harder to find as fewer and fewer people are letting them out of their collections. Call us today at 1-800-292-0008  for pricing on this vintage Vendo 44 Coke machine, of any of our restored vintage vending machines. Furthermore, if you have a machine of your own that needs restoration, we can do that too!

Our restorations are the finest quality available anywhere due to our attention to detail, and the fact that no one has been doing it for longer. This means that unlike other restoration shops out there, we repaint even the parts that you can't see. We restore old soda machines, slot machines, candy vending machines, vintage visible gas pumps from the inside out. Any of our vintage restorations are guaranteed to the same functionality that would have been expected from a new machine ordered from the manufacturer. Furthermore, all of our restorations are done to historically correct specifications with original, period correct signage and paint schemes. This ensures if a collectible item that will have future appreciable value. 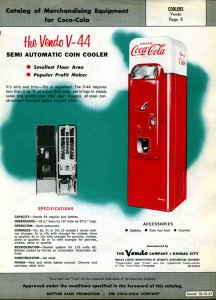 The history of the Vendo 44 begins with the VMC company. For 1956, Vendorlator Manufacturing Corporation (VMC) introduced the VMC-44. As a very narrow, single selection Coke machine, it proved very successful. During 1956, the Vendo Company merged with Vendorlator. Vendorlator continued to manufacture machines. However, certain models were re-branded as Vendo machines, (such as the VMC 44). The VMC 44 would now carry the Vendo name on the lower front door and on the newly added, chrome coin entry plate. The main door liner was changed from metal to plastic at this time as well

The result, (for the 1957 model year) was the Vendo 44. “Built by Vendorlator for Vendo” (as it actually reads on the metal ID tag)

To operate the Vendo 44 Coca Cola machine, you insert 5 or 10 cents in the chrome coin entry, the coin mechanically allows you to crank down on the chrome vending handle, and your bottle of Coke would come out the bottle chute below

The Vendo 44 is a single selection Coca Cola machine, designed specifically for the original 6-1/2 oz Coca Cola bottle. This size bottle was discontinued in the mid 1990’s, replaced by todays 8oz Coca Cola bottle, (which uses thinner glass), making it a smaller diameter bottle. The 8oz Coca Cola bottle will not work well in the VMC 44 or Vendo 44, without adding a “Shim Kit”, (to compensate for the difference in bottle sizes). Once a shim kit is installed, the Vendo 44 Coke machine will then accept the Coke 8oz bottle, Diet Coke 8oz bottle, Coke Zero 8 oz bottle, Sprite 8 oz bottle, or the new Coke Life 8 oz bottle. Most customers prefer glass bottles. However, we do offer a 12oz can conversion

For 1956, Coca Cola began a new advertising campaign, focusing on a fresher new look. From 1956 on, all Coca Cola machines would have the top 12″ painted DuPont Iceberg White with Red lettering, and polished metal trim. Each VMC44, and Vendo 44 came from the factory with the new two-tone paint scheme

There were three optional mechanical coin mechanisms available for the Vendo 44, each could be set for 5 or 10 cents 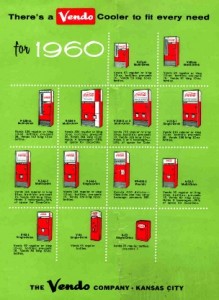 For the 1960 model year, Vendo introduced many new Coke machine models, all with a modern “Square Top” look. However, the Vendo 44 did not change, cosmetically. Because the Vendo 44 was so narrow, (only 16″ wide) it could fit almost anywhere, especially small locations that might otherwise not be able to have a vending machine. For this reason, the Vendo 44 proved successful, and continued production through 1961

Once a list was created (from these three serial number ID tags), a pattern emerged that could then prove the date of manufacture, and if the cooling system was factory installed, or had been replaced. All three ID tags must fit into place, on the charts below (like a puzzle piece). If your serial number and date code ID tags do not fit on the chart below, something on your Coke machine has been replaced, and we may not be able to establish a date of manufacture

The cooling system serial number ID tag, is Red and Silver, and located on the base plate of the compressor (right behind the drain pan, to the left). A serial number will be stamped into that ID tag

Here is how this number breaks down

The compressor has its own serial number ID tag as well, similar to the base plate date code. The compressor ID tag, is an embossed metal tag, welded to the back of the compressor. The date code will be in the upper left corner, of that tag

Please email us your VMC 44 or Vendo 44 serial numbers and date codes. We will gladly add them to the chart below

The 1957 Vendo 44 Coca Cola machine, featured a VT10 Tecumseh cooling system, a Two-Tone (Red & White) paint scheme, chrome coin entry plate, and “Have a Coke” side logo. The Black and Silver ID tag, is mounted outside the cabinet, door hinge side, and read “Vendorlator”. All VMC 44, and Vendo 44 serial numbers, end in A31

The following chart are results from the list we have created, starting with the cabinet serial number, followed by the cooling system serial number, and finally, the compressor date code (if available) 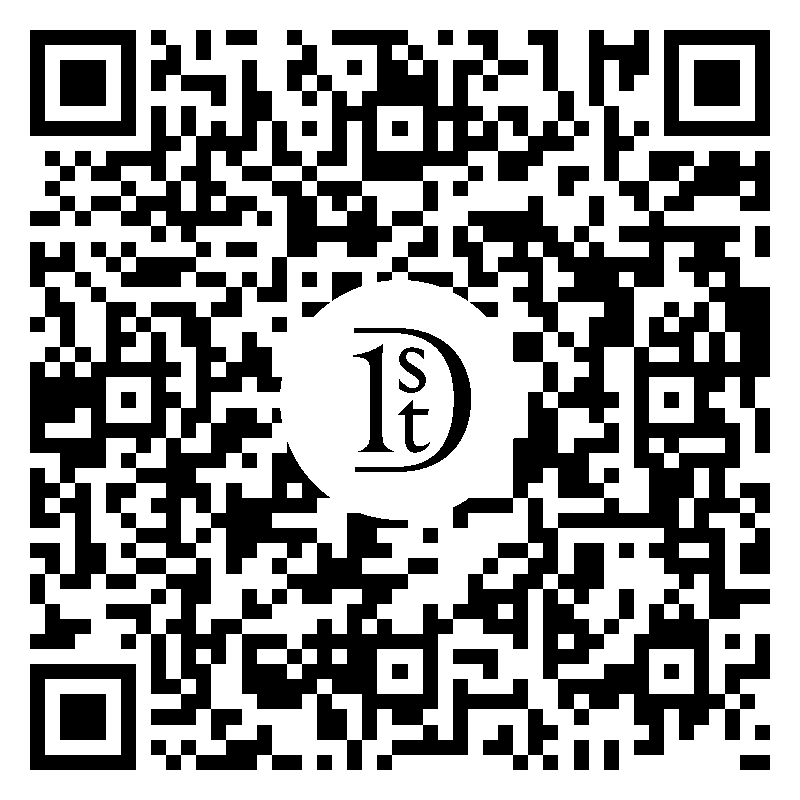 1950s Era Large Metal Letters
Two sets of custom-made metal letters made for the Wilkinson steel plant in Vancouver for a new office in 1950. The company was founded in 1910 and was one of BC's premier steel and ...
Category

1950 Advertising Sign on Board
Nice original old painted sign on board, acquired from a private collection where it has been for 30 years. Sign came from the mid west in the 80's and has been kept ever since. Ni...
Category

Temprite Coca Cola Large Cooler
By Coca Cola Bottling Co.
This a red large rectangular metal Coca Cola cooler with two handles. There is an upper compartment when you open the lid and below it, there is a large deep compartment for the Coca...
Category

Huffy Beach Cruiser Bicycle by Coca-Cola
By Coca Cola Bottling Co.
Located in Port Jervis, NY
Hard to find for they were given out only to a select few distributors of the beverage. In excellent original condition. Large and comfortable seat. Ride with style.
Category

1972 Love Buggie Coin Operated Kiddie Ride
Colorful Volkswagen kiddie car ride from circa 1972. This has not been tested. Please inquire about working order. This can be seen at our 400 Gilligan St location in Scranton, PA.
Category

Mid-Century Modern Coin Operated Commercial Wall Mounted Music Box
Located in Hamilton, Ontario
This coin operated commercial music box has no label or maker's mark on it, but it is presumed to have been made in the United States in approximately 1965 in the period Mid-Century ...
Category

Reluctance to drink this nonsense, then after it like cotton wool and head and body. - Just a recommendation. - I still have things to do today. - Very important. - Highly.

I believed that this miracle of nature belongs not only to my mother, but also to me. Gradually, I began to notice that on some days my mother takes particular care of our household. And, strangely enough, in the morning.

The effect was, as usual, amazing. The girl was in euphoria. She went crazy from the physical sensations of continuous friction, and constant fullness.