The Place for Model-A Ford Carburetors

There are two external adjustments to be made on the carburetor when it is installed.

The Place for Model-A Ford Carburetors 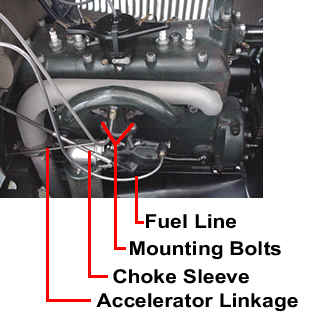 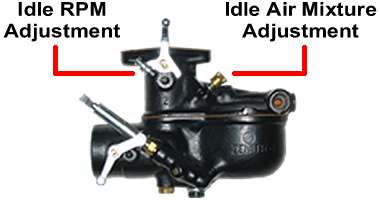 Re: What does the Dash Carburetor adjustment adjust?

This is a draft of an article that will be in the Spring Model A Times, might help explain it to you.
Carburetor
Mixture Mastery
Unlike an EFI system, a carburetor is a purely mechanical device that meters air and fuel in the proportion needed for combustion. While this might seem simple enough, a carb takes advantage of a handy characteristic of nature identified way back in by the physicist Daniel Bernoulli called the Bernoulli Principle, better known as the Venturi Effect. The key aspect of the Bernoulli Principle is the inverse relationship between velocity and pressure, which dictates that as the air speed increase through a carburetors venture, the pressure will drop. This lower pressure is just what is needed to pull fuel out of the carbs bowl, which is at atmospheric pressure. The beauty of a carb is that its operation is based on the simple properties of physics. Harnessing the velocity-dependent pressure drop to meter air and fuel in exactly the needed proportions over a wide range of operating requirements relies on a complex system of calibrated orifices, and those are the items that comprise what we refer to as the cars calibration, or tune. What is actually being calibrated here is how the carburetor as a metering device will respond to changing pressure differentials in its various circuits.
The level of carburetor tuning that an enthusiast can practically perform will depend upon the design of the carb, and the tuning components available. Many of you run the original updraft Zenith design carb with limited adjustments. This carb needs careful rebuild requirements, to assure that correct sized jets are installed. If the jets are incorrect getting a good running adjustment is difficult if not impossible. As technology advanced down draft carburetors were placed on the Model A, one of the more popular ones was the Stromberg, which is seen quite often on cars today. One of the most common carburetors on touring Model As is the Weber downdraft. This is a modern carburetor that is sold by most of the parts houses. The most basic level here is a backyard mechanic armed with nothing more than a screwdriver a good ear to attack his carb. With a little talent you can adjust the idle mixture and speed, and call it a day. This idle adjustment screw is on the top of the carb on the Zenith/Holley carbs. There is also the idle adjustment on the throttle linkage. When adjusting this make sure that the throttle lever is fully retarded. The fuel mixture is adjusted by turning the choke knob. This adjustment can be made while driving and may be necessary when changes in driving conditions happen (altitude change, steep climbing, etc.). Again care in the rebuilding of these carburetors comes into play. If the seat for the adjustment needle is to close on are rusted and pitted no adjustment will be adequate to compensate for the fuel seeping past the damaged seat.
The use of the original carburetor requires careful evaluation if you plan on doing longer tours. There are several new carbs being offered that have the appearance of the original but offer new surfaces for all the seats etc. Again these are offered through various part suppliers. While we use the Weber Carburetor on the Sedan we use on the longer tours, we have taken many extended tours with the original carburetor and had great success. We will be installing the original double venture Holley carburetor on the Phaeton Project Build.
There are several books on rebuilding the original carburetors; we referred to The Model A Ford Carburetors by Paul Moller that was written in the early 70s. In addition we referred to Holleys website for insight into carburetor adjustments.

After reading this page:
Visit the fordgarage.com for historical and detailed information.
Visit Model-A.org for further problem solving.

Suction created by the pumping of the pistons, causes fuel and air to flow through the carburetor into the engine. Each Alternate downward stroke draws in a fresh charge of mixed fuel and air.

The throttle plate manages the amount of air flow that is delivered to the engine and is controlled by the "Throttle Lever" and "Accelerator" inside the cab.

Pulling on the Carburetor Adjustment Knob, often called the GAV (Gas Air Valve) inside the cab opens and closes the Choke Plate. Turning the GAV enriches or leans the fuel mixture flowing through the "Cap Jet".

When the engine is started with the choke closed a greater vacuum is formed, pulling in a larger amount of fuel.