The following phones and phone-related devices are approved and supported for use with the ShoreTel Sky phone system. Use the charts below for choosing the right phones and other devices for your organization.

The following IP phones are supported by the ShoreTel Sky phone system.

ShoreTel Sky supports the 400 series IP phone models shown in the following chart. The "Availability from ShoreTel Sky" column below shows which phone models can be rented or purchased (new). 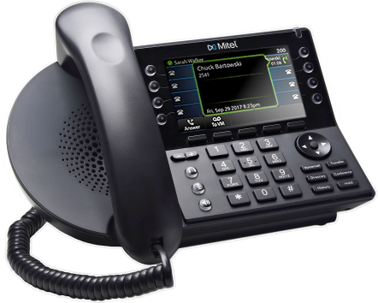 ShoreTel Sky supports the Cisco 7900 series IP phone models shown in the following chart. You can also download our Cisco Phone Comparison Guide. The "Availability from Mitel" column below shows which Cisco phone models can be rented or purchased (used). Customers also have the option of purchasing any supported Cisco phone model at a vendor of their choice for use with the ShoreTel Sky phone system.

The following IP conference phones are supported by the ShoreTel Sky phone system.

A variety of wired and wireless headsets can be used with the phones and devices supported by the ShoreTel Sky phone system. See the Supported Headsets article for a list of supported headsets.

To view information about sidecars (button boxes) that are supported for Cisco phones, see the Sidecars article. The two sidecars that are available as a rental are the Cisco 7915 sidecar and the Cisco 7914 sidecar. Note that the BB424 Button Box is not supported.

To view information about ATA devices that are supported by the ShoreTel Sky phone system, see the ATA article.

See the following articles for information about switches that are supported by the ShoreTel Sky phone system:

For information about routers that are supported by the ShoreTel Sky phone system, see the Managed Routers article.

An IP phone can be powered by either a compatible Power-over-Ethernet (PoE) switch or an individual power adapter. Depending on the brand of phone used in your phone system, different types of power adapters are available as described below. For a more detailed look at supplying power to a phone, see the Phone Setup article.

Q: Who will configure and install my IP Phones?
A: The installation and configuration of your IP Phones is the responsibility of your IT personnel or IT Partner.

Q: Are any analog conference room phones or cordless phones supported?
A: ShoreTel Sky supports the Cisco SPA 112, which allows use of traditional analog phones over IP (Internet Protocol).

Q: Is support available for our company's IP phones?
A: Yes, basic hardware and configuration troubleshooting is included with the ShoreTel Sky service. Most issues can be remotely resolved by our support team. Consult your vendor regarding warranty service and replacement.

Q: Can I use an IP Phone from my home or remote office?
A: Yes, IP phones can be used from a broadband-enabled location (additional networking hardware may be required). See the Remote Phone article for more information.

Q: What are the options for providing power to the phones?
A: See the Power Supply for IP Phones section above.

Q: Why are there no Cisco switches, which we are currently renting from ShoreTel Sky, listed in the Supported Switches section of this article?
A: As of March 1, 2016, Cisco switches are no longer available as a new rental device because they have reached End of Life. However, existing customers who continue to rent this device will receive support as per their rental contract. To learn about the newly supported HP switches, see the Supported Switches section of this article.

If you are having trouble with your supported IP phone or other device, please create a Support Cases to communicate the information to Mitel Support.

To order an available phone create a Support Case to communicate the information to Mitel Support. 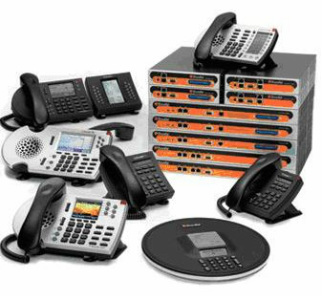 Shoretel's on-premise business VoIP phone system with built-in unified communications (UC) lets both on-site and remote users see who is available at any given moment, and decide how best to reach them. With less time spent playing phone-tag, everyone has more time for the real business at hand.

An ingenious purpose-built IP architecture makes our on-premise business VoIP phone system look and behave like a single, unified platform. It distributes the system’s intelligence across the communications environment so the system scales and grows as needed, across sites, or even countries. With ShoreTel Director, an intuitive browser-based administrative interface, IT staff can maintain the system from anywhere on the network. It all comes together with plug-and-play ease, from the full line of Shoretel IP voice switches and IP phones that are ready to go as soon as they’re plugged in, to the online directory that updates dynamically.

The business VoIP phone system's distributed architecture and applications, and its N+1 redundancy help provide five-nines availability for mission-critical business continuity. The switch-based hardware platformhelps ensure that in the event of a WAN failure, the phone system continues to place and receive calls on the Public Switched Telephone Network (PSTN).

Our total cost of ownership (TCO) analysis tool can show you why ShoreTel offers the lowest for TCO in the industry. Many customers report a return of investment within a year. Over the long term, the unified communications tools of a ShoreTel business VoIP telephone system reduce costs company-wide by streamlining business processes, putting critical information in reach, and eliminating both missed calls and the need for expensive third-party conference services.

ShoreTel applications, such as unified messaging or system administration, can be installed on physical and/or virtual servers residing in a data center or on premise.  Centralized or distributed – ShoreTel customers can leverage the deployment model that best suits their specific IT environment.

We can source any item, even from brands that are not represented on our website.

With fervor, Cinderella said. With Aunt Fairy, something became - She rolled up her eyes, Her boobs pounded And let her nipples torment, Yes, moan. So pitifully. He took Cinderella's fright here: - What happened to aunt, all of a sudden. SchA here will grunt, by chance, And to me, bitch - answer.

Back, comfortably sitting on me.

We all got dressed, put the chairs in their places and sat down at the computers, but when we got dressed I found Igor's underpants and I could. Not resist hiding them in my pocket. Vitya searched - searched, but apparently not so upset about the loss, he sat down at the computer. And I was sitting in the corner, pulled them out and began to sniff. they smelled like a guy, apparently he did not change panties so often.

When she returned to her room, all the girls were already asleep. Lika imagined how many nights she still had ahead and smiled sweetly. And then with dislike she remembered Alla Ivanovna and immediately naively assured herself that now, when he had Lika, Sasha would definitely drive. Away the annoying head teacher the next time. This incident happened at a time when no one knew about mobile phones, there were rubber products from the Bakovsky plant in the Moscow region, GOST 4546-81, type A, No.