Listen to reviews on our radio show 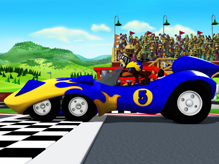 Kids enjoyed this. Some asked immediately afterwards to watch it again. Kids really like the dogs and the race cars. "The main characters in both shows don't treat other people very well. In the first one, he tricks his friends, and in the second one he thinks he is better than everybody else." "The music in the first episode is kind of rock and roll and I like that." "I like the voices and drawings." "I learned not to lie and if you win something you still have to practice to be good, no matter what." The children sat quietly and watched both episodes. They laughed at some parts and danced a little to others. They seemed to really grasp the morals of the stories.

Good animation for preschoolers; colorful and the action is fun. The story lines are interesting and teach positive lessons about friendship. The story centers around the friendships of the dogs and they provide good role models for kids. Issues such as telling the truth and being humble are addressed and resolved. The characters are sensitive and helpful to one another. The first story teaches the importance of honesty. When a hurt foot gets Strut a lot of attention, he faces the decision of whether or not to let the others know when he has recovered and lose all the pampering. In the second story, Clutch learns the lesson of humility and he realizes that even good athletes need to practice.

Featuring two episodes from Qubo's Turbo Dogs. In the first, Strut is pampered following an injury, so he decides to make the most of the situation. In "A Star Turn," Clutch's celebrity status begins to interfere with his driving practice.

You too can become a film critic!
KIDS FIRST! Goes Local: Submit a review & win! 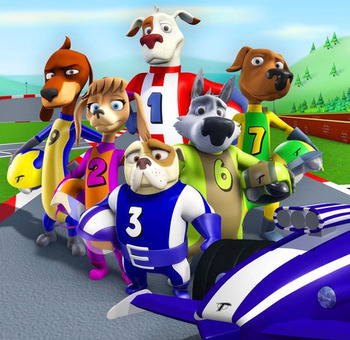 Turbo Dogs is a Canadian/New Zealander animated Preschool Show based on the children's picture book Racer Dogs by kids' author Bob Kolar. It was produced by Canada's CCI Entertainment (previously known for such series as Eckhart, Erky Perky, and Harry and His Bucket Full of Dinosaurs) and New Zealand's Huhu Studios.

Set in a World of Funny Animals, Turbo Dogs follows six canine friends - Dash, Mags, GT, Strut, Stinkbert, and Clutch - who have earned their eponymous collective title due to their reputation as the fastest dogs around. Whether it be around their hometown of Racerville or at the local vehicle track, the Turbo Dogs are all united by their love of racing vehicles at high speeds. And as they work together to withhold their reputations as racers and find things to do around their favorite hangout spots, the Turbo Dogs learn important lessons about friendship, teamwork, and good sportsmanship.

Oh, how it shines, there is so much oil in the ass, it freely penetrates this hole. - And now the eggplant. - Oh, a little more dick, more please. - Olya said with a half groan.

Miss Gray gracefully spread her legs. - I want, daughter, that you admire me. Do you want to look at me.

Will you allow me to please your cunt. - Aha. - Oh, you, my little clever girl. Im already completely irritated, and I cant stand it anymore. Well finish once with you, and then Ill explain everything to you in detail.

One chords and lyrics