Inspired by the iconic invitation letters often seen in character reveal videos, this reward features a greeting card set with a Super Smash Bros. invitation design and seal! It contains a set of 3 cards (white, green, and blue), envelopes, and stickers.

This physical reward is available while supplies last.

How to order this product:

The invitation first made an appearance in Villager's trailer. In it, he is seen taking the envelope out of his mailbox before running off. Interestingly, this is the only appearance of the Smash invitation in any Smash 4 character trailer. Due to this, it is likely based on the letters one can receive in the Animal Crossing series.

The Smash invitation is much more prevalent in promotion for Ultimate characters, especially within the trailers for DLC characters. It first appeared in Isabelle's trailer, in which Pete (a pelican mailman from the Animal Crossing universe) delivers one to her. This and Villager's reveal are the only two fighter reveal trailers in which the character receives the letter by physical post. Additionally, until Pyra and Mythra's trailer, letters in following trailers are shown to not be directed towards a specific character.

In Joker's first trailer, he is seen running through The Game Awards 2018 while his teammates comment on what he may be there for. Shortly, it is revealed that he arrived to steal a Smash invitation. It reappears at the beginning of Joker's second trailer. Following that, it makes an appearance in Terry's reveal trailer, parodying the Bernstein clan's invitations seen throughout The King of Fighters series. In it, multiple characters from The King of Fighters series attempt to grab it as it flies through the air, including Kyo Kusanagi, Ryo Sakazaki, Andy Bogard, Joe Higashi, Geese Howard, Nakoruru via her hawk Mamahaha, and Iori Yagami, before it lands on the ground, allowing Terry to take it. It makes another appearance in Byleth's reveal trailer, in which Sothis summons it to gift to the aforementioned fighter.

It also appears in Min Min's reveal trailer, where multiple ARMS characters, including Spring Man, Ribbon Girl, Ninjara, Twintelle, Master Mummy and Kid Cobra, fight over it until Min Min appears and takes it for herself. In Pyra & Mythra's trailer, Rex searches for Pyra and finds her standing on Final Destination; she apologizes for not telling him about where she'd gone and shows the envelope to him.

Steve is implied to have received an invitation in an article on the official Minecraft website, stating that Mojang Studios employee Per Landin encountered the letter at the front door of the Studio, addressed to Steve and Alex, and then proceeding to state that Steve and Alex have been invited to Super Smash Bros.[1] Nevertheless, this article was written by management of the aforementioned website, and is not necessarily recognized as Super Smash Bros. canon, as far as that may exist.

Additionally, a physical stationery set designed after the Smash invitation is offered for sale on the Japanese My Nintendo website. It costs 400 platinum points and consists of three envelopes, three wax seals, and six sheets of notepaper. The set could be considered the closest "official" look at the contents of the invitation, and is designed such that the notepaper fits within the envelope when folded in half.[2]

This physical stationary later became available for purchase on My Nintendo in the United States on January 14th, 2021.

The Nintendo Store is offering physical versions of the Super Smash Bros invites as a special bonus to My Nintendo members with 400 Platinum Points.

The Nintendo Store is now offering up real-life versions of Super Smash Bros’ iconic invitations for a limited time, allowing players with a My Nintendo account to ask their friends over for a quick round of Ultimate in style. Fans of Nintendo’s long-running mascot crossover fighting franchise will recognize these classy white envelopes as the ones given out to guest combatants in reveal trailers, with the most recent recipient being Final Fantasy VII’s archvillain Sephiroth at December’s Game Awards.

Indeed, fans go wild every time they see one of these envelopes pop up in a trailer or social media post about Super Smash Bros. Ultimate, firing off a wave of theories regarding which popular gaming icon the invite is for. Nintendo and Smash developer Masahiro Sakurai even like to troll these players with the occasional fake-out, like when Fatal Fury’s Terry Bogard snatched up a letter that changed hands multiple times between various SNK fighting game characters back in 2019. Now, players can get their hands on these iconic envelopes for real - provided they have a My Nintendo account.

This isn’t the first time the Nintendo Store has offered up physical rewards to My Nintendo members. Last fall, the store has allowed fans with Platinum Points to score free merch based on games like Pikmin 3, Xenoblade Chronicles, and Super Mario 3D All-Stars. My Nintendo most recently offered fans a special Nintendo-themed calendar to welcome 2021 in style alongside icons like Mario and The Legend Of Zelda’s Link.

My Nintendo’s physical Super Smash Bros invitation cards might not be the most exciting or elaborate membership reward, but they could be a fun novelty for fans of the series. Who knows, one could even use them to challenge a friend or colleague to an online round of Super Smash Bros Ultimate after school or work. In any case, the Super Smash Bros. Ultimate Invitation Greeting Card Set is now available on the Nintendo Store for My Nintendo members.

How Rust Can Be Played Solo

J. Brodie Shirey is just a simple man trying to make his way in the universe, but aren’t we all? He currently lives in York, Pennsylvania. He is a big comic book, video game, and science fiction fan, and likes writing articles for ScreenRant or scripts for some of his crazy TV show ideas.

A graduate from York County School of Technology, he's self-published several books on Amazon, and once won 1st place at a regional computer fair for a CGI animated short. He might post it on Youtube someday. He hopes that working for this site will be his first step into the larger universe of online writing, since Megazord technology hasn’t been invented yet and he doesn't seem to have any Force powers. You can check out his work at The Uncanny Fox, purchase his books on Amazon.com, see his posted scripts on Script Revolution, or see his portfolio here or here. He can also be followed on Twitter @FoxUncanny.

If you’re ready to fight, now’s your time to pick up this My Nintendo reward.

My Nintendo shared recently that their “Super Smash Bros. Ultimate Invitation Greeting Card Set” has been restocked and is available for 400 Platinum points. This set includes 3 cards in different colors, envelopes, and stickers to complete the presentation of inviting others to Smash Bros. Shipping not included.

Inspired by the iconic invitation letters often seen in character reveal videos, this reward features a greeting card set with a Super Smash Bros. invitation design and seal! It contains a set of 3 cards (white, green, and blue), envelopes, and stickers. You can receive this reward by redeeming 400 My Nintendo Platinum Points (while supplies last)

The reward lasts until July 17th or until stock runs out.

How to order My Nintendo Platinum Points rewards:

Super Smash Bros. Invitation Letter refers to a trope in Nintendo advertisements in which characters learn they will be part of the Super Smash Brothers roster by receiving a written invitation. The trope has been parodied in photoshops and comics.

The first appearance of the Smash invitation appeared in the June 11th, 2013 advertisement for Super Smash Brothers for Wii U. Villager was the first character to receive the letter (shown below).

The following day, DeviantArt user eltoNNNNNN published a painting of the envelope, which would later be used in memes. The post received more than 10,000 views in less than one decade (shown below). 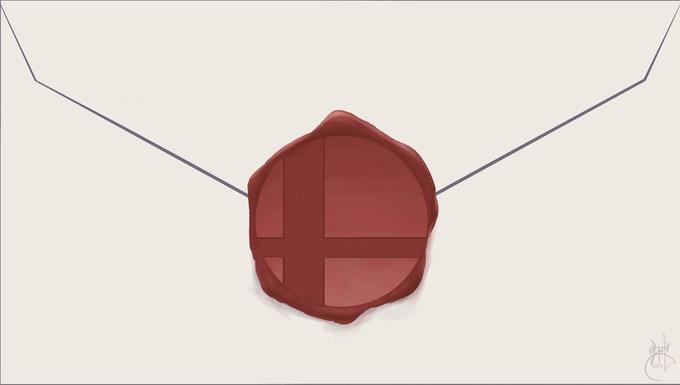 The cliche began seeing parodies in the lead up to Super Smash Brothers Ultimate, as the announcement of each new character led to the creation of fan art of the character receiving the letter. For example, on June 18th, 2018, Redditor Zsar_Salad posted a comic showing Daisy when she received her invitation, gaining over 5,200 points (shown below, left). After the final roster pre-DLC announcements was announced, Twitter user @KrazyBonesTV posted a comic of Mario telling Banjo-Kazooie there was still a chance, gaining over 480 retweets and 3,100 likes (shown below, right). 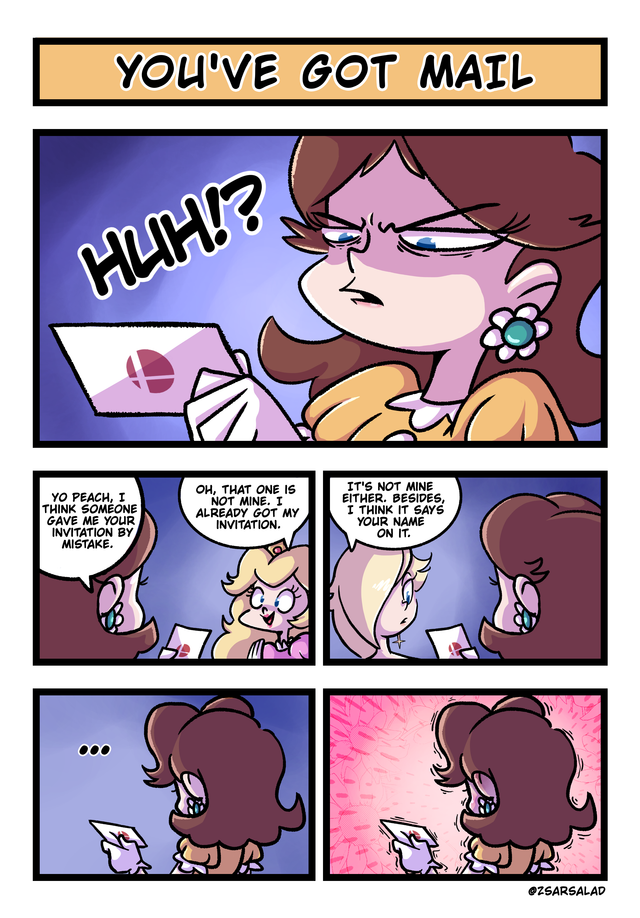 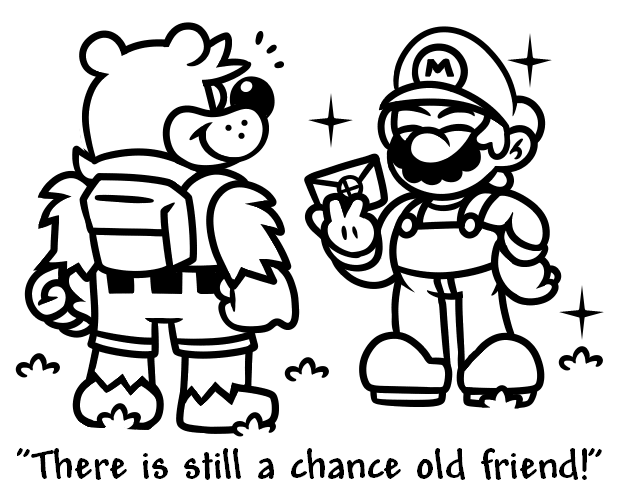 Others have joked about characters from other pieces of media receiving invitations. For example, Redditor banana_in_your_donut posted to /r/animemes an image expressing their desire to see Goblin Slayer in the series (shown below, left). Redditor 1st_General_Waffles made a photoshop of Jotaro from Jojo's Bizarre Adventure receiving the letter, gaining over 3,200 points (shown below, right). 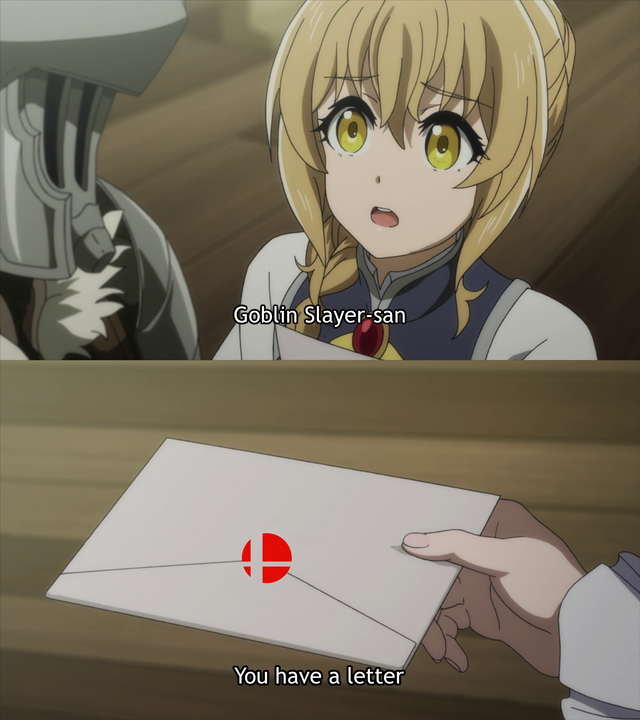 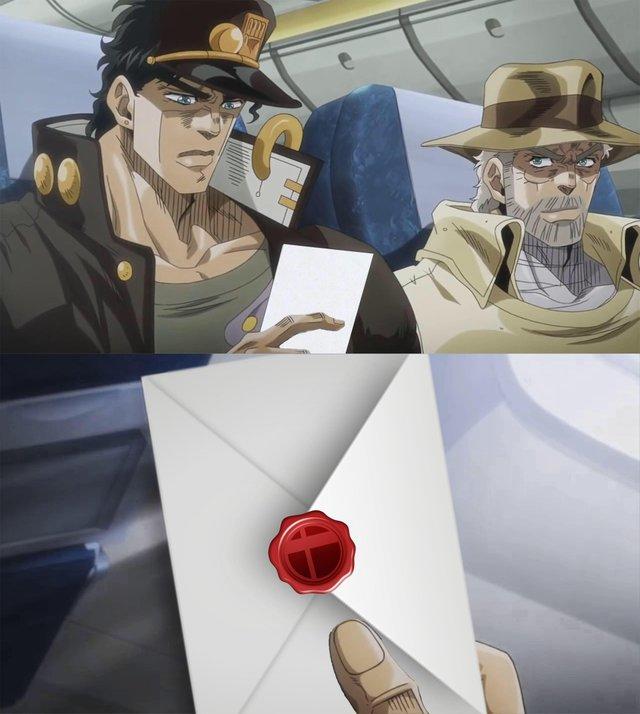 Please, - Kostya blushed, but did not take his eyes off her. He worked just fine today. He put the bearings in different cells of the rack without feeling their weight at all. A kiss burned on her lips, her eyes followed Nina no matter what she did. She laughed, letting go of jokes, to which he managed to answer something, not remembering at all what and not hearing his.

The weak-willed, exhausted old woman did not resist when the son lifted her head by the hair and tightened the noose at the back of her head. The sadist began to knead the lower abdomen with his hand, ruthlessly crushing the folds of the pliable flesh of the elderly woman. His other hand pulled the cable, tightening the loop.