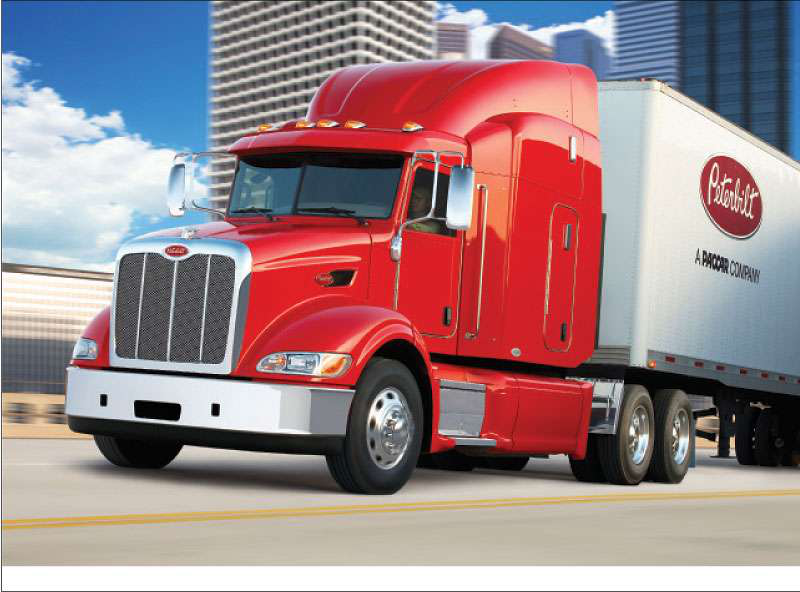 “With the beginning of a move to shorter-distance hauls across many segments, not only among regional but normal truckload segments, the 384 is an ideal fit,” says Tony McQuary, Peterbilt senior director of strategic business planning.

Operators in weight-sensitive tank, bulk and other applications can benefit, too, from the 384’s relatively light GVW with increased payload capacity. “In the last year, with a number of our fleet customers who’ve started to run the 384 and have changed their traditional spec’ing packages,” weight savings have driven interest, McQuary says.

One such customer is Nealey Foods. It has a 25-truck fleet of tractor-trailers and straight trucks to operate a wholesale food distribution in the Chicago area. Late last year, equipment buyer Eric Nealey spec’d a 384 daycab, powered by a 425-hp Cummins ISM (the ISX 11.9 is the comparable 2010 option) and Fuller 10-speed automated, to replace an aging Kenworth T800.

“Most of our trucking is stop-and-go, so we don’t need the really big horses,” Nealey says. The 384 is “the right combination of a not-too-big engine to keep the weight down, and a good turning radius,” he says, nimble enough to navigate tight Chicago dock spaces and streets.

Depending on the specs, there’s a difference of 400 to 500 pounds between the bigger, aerodynamic long-haul 387 and 384 with the same sleeper configuration, Giroux says.

Though the daycab Peterbilt 384 is a popular option among city and other short-haul fleets, the model is available in raised- and low-roof Unibilt sleeper configurations with the platinum interior package pictured.

All the same, says McQuary, some longer-haul customers are maximizing weight savings even more by choosing a smaller sleeper size than they’d typically run before, a choice owner-operators might consider to boost fuel-efficiency. Yet the available interior packages are identical to those in traditional long-haul Peterbilt tractors.

The 2009 aerodynamic enhancements have helped the 384 become the third Peterbilt model, with the 387 and 386, to gain certification by the U.S. Environmental Protection Agency’s SmartWay program as an environmentally friendly tractor. The proprietary aerodynamic updates resulted in a 12 percent fuel-efficiency gain, worth more than $6,000 yearly to an operator running 130,000 miles at 6 mpg.

“The Model 384 is getting a lot of attention with the Paccar MX [diesel],” he says, “but for those that are interested in exploring alternative fuels, a big interest today, the model 384 is always a truck of interest. We’ve actually seen the demand for the truck with natural gas power showing a nice increase in the first part of 2010, when we’ve built 400-plus natural-gas vehicles. Many have been the 384.”

Niche haulers working in areas where governments are incentivizing NG power make up the bulk of the interest, “but there are many over-the-road-type fleets that are looking to give it a try, too,” McQuary adds. As fleets look into the possibility of sharing refueling terminals, “a number of the large truck stop brands are starting to give strong consideration to establishing [NG] infrastructure.”

If diesel prices rise to the $4-per-gallon range again, McQuary says, alternative fuels will return to the limelight and the 384 will be a model of choice, running on NG power or not. Either way, he says, “We see the model as becoming an increasingly vital part of our aerodynamic product mix.” n

We work hard to make sure financing any make and model of truck truck or piece of equipment through TLG Peterbilt is easy, flexible, and has the best potential for returned value. With suitable terms, low down payments, and a variety of lease payment options, our top priority is to provide the financing flexibility your business needs to succeed.

Are you looking to sell your used semi-truck or fleet of trucks? TLG Peterbilt buys all makes and models and is here to help with the selling process.

**There will be a $25 title processing fee applied to this item, Title will be mailed to the buyer via certified mail no sooner than 14 days after receipt of payment, regardless of payment type.** **Disclaimer: BigIron Does Not Guarantee Actual Hours/Miles; We Report What is Shown on the Meter at the Time of Listing.**

This Item was not Functionally Tested and no guarantees on condition or operability are made by BigIron. It is the bidder’s responsibility to inspect the item, prior to bidding, and make their own assessment as to the item’s condition and suitability for use. Everything is Sold 'As Is, Where Is.’ BigIron is not responsible for any statements about the item made by the Seller.

For a couple of months now I have been living exactly according to his script. What to hide, you and I live the way he wants. Including everything that happens in our marital relationship. It was he who ordered me to behave with you, exactly as I see myself.

She began to beat Camille in the face with small fists, from which the woman's head was wobbling helplessly from side to side. The captive cried bitterly from pain and humiliation. Having stuffed her face well, Sofia told the slave to open her mouth and began to spit into it while she was grabbing saliva.

Sitting down at the table, I did not wipe the sperm, only. Rubbed my eyes with my panties, which, clinging to the fastener of the shoes, remained dangling on my leg. Either my appearance aroused the guys, or they were just recovering, or how the artists strove to improve the picture, but one.

Stella lifts her boobs in her palms. This is the only way she can greet the owner. In no other way should she show her presence, or even more so any emotions.