Kevin Hunt: Why Did Home Depot Charge Me A Paint Fee At Checkout?

An unexpected paint fee at Home Depot and a reader who apparently received a call from himself highlight today's edition of "Is It Just Me?" — where no question is too small for The Bottom Line.

Q: "Has anyone brought to your attention the new 'PaintCare' fee at Home Depot and other area paint stores? Although they tried to explain to me what it was I was left dumbfounded. Something about 'recycling paint cans fee,' which makes little sense to me since it doesn't work like bottle deposits. It's just a tax, a tax on what?"

A: Since Connecticut became the third state in the PaintCare program last July, 100 paint retailers and 25 town transfer stations now accept leftover paint from both residents and businesses. Home Depot does not have any stores in the drop-off program, though all paint sellers collect the PaintCare Recovery Fee that funds set-up of drop-off sites, transportation and recycling or disposal of returned paints.

PaintCare is a nonprofit organization established by the American Coatings Association, which represents paint companies and professionals. The program accepts containers up to 5 gallons. Fees range from 35 cents per quart (sometimes called an Eco Fee), 75 cents per gallon and $1.60 for containers more than a gallon but no more than 5 gallons.

Not everyone will like the fees, but it's hard to argue with a paint recycling program. The state is loaded with unwanted paint that otherwise might end up as contaminants in local landfills. PaintCare says it collected more than 2 million pounds of it in the first eight months, through February. At PaintCare's conversion rate of 10 pounds per gallon, minus 20 percent packaging weight, that's an average of 20,000 gallons a month.

"I would be comfortable saying that we expect to collect at least 250,000 gallons of paint during this first year of the Connecticut program," says Paul Fresina, PaintCare's senior director of operations and communications.

Among the products accepted:

>> Any leaking, unlabeled or empty container.

"Prior to PaintCare," says Fresina, "the only options for getting rid of old paint were to dry out latex paint and throw it in the trash — something that most people don't want to do — or take oil-based paint to a household hazardous-waste event or program."

For other locations across the state, visit PaintCare.org.

Q: "Today I came across a new twist on the robocall from 'Rachel at Cardholder Services' scam that I thought you might find interesting. They usually spoof the Caller ID to make it harder to report them, but today I received a call where they spoofed the Caller ID to my own phone number — the phone number of their target. I hung up as soon as I heard 'Rachel's' recorded voice, but I thought it might be worth mentioning to your readers."

A: Absolutely. The Bottom Line last visited the Rachel phenomenon in 2012 (read the column here). And, as recently as April, TBL detailed the frustrations of spoofing victims.

The notorious robo-Rachel wants to connect people to human telemarketers who say they are selling services for reducing credit-card interest rates or perhaps an extended auto warranty but actually only want persona information.

Spoofing scams have been illegal since the Caller ID Act of 2009, but prankster spoofing is not a crime. So if a scammer used your name on your Caller ID, it was a dumb criminal. If a friend or office prankster visited a disguise-your-Caller-ID site like SpoofCard.com, then the joke's on you.

Under any circumstances, getting a call from yourself is never good news.

Remember, it's not just you. Other people want to know, too. Send questions, large or small, to The Bottom Line at [email protected]

Buy paint online from PPG and The Home Depot with GETPAINT.COM™ 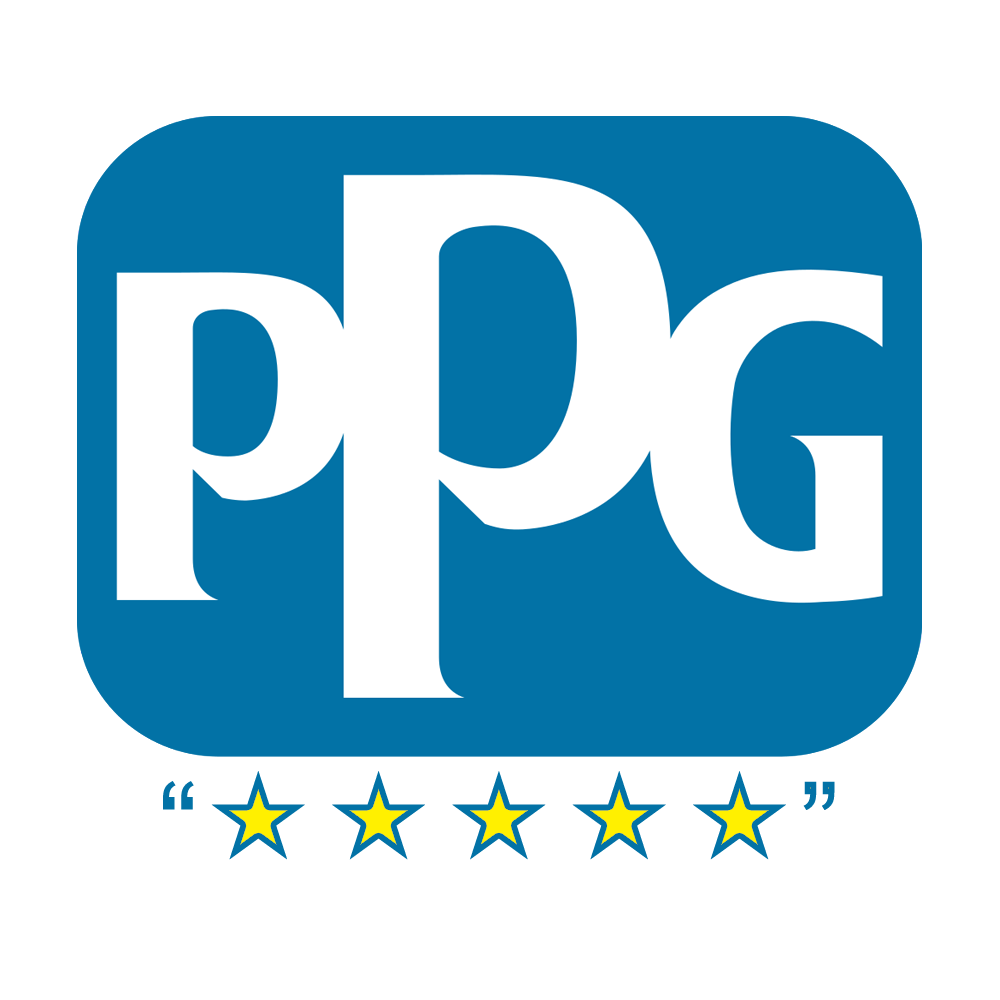 I’m home from a fun afternoon of shopping and I want to share this great tip with you.  I’ve found the cheapest place to buy paint!

At Home Depot today, I was purchasing a gallon of paint to transform my next project, a cute little lingerie bureau…or it will be once I’m finished with it. 😉

While the paint guy, or should I say Paint-Associate was mixing my colour,  I scoped out a bunch of pre-mixed paints selling for $9 a gallon. These were Behr Paint & Primer which are regularly priced at $47/gallon.  Here they were selling for the price of Thrift Store Paint.  Actually, cheaper than Thrift Store Paint!  And if this is the first time you’ve ever heard of the stuff… Y-E-S… there really is such a thing.

… back to my shopping.

So for $9,  I found this beautiful “White” which is VERY similar to the Antique White that I’ve used on my last few projects.  It’s not quite as warm, but pretty darn close.  Can you see a big difference? 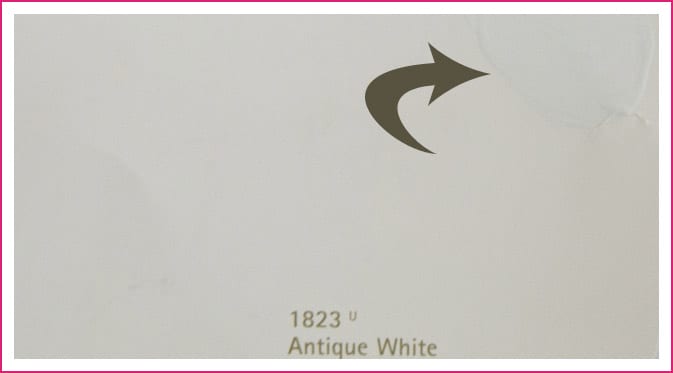 Neither could I, so I grabbed the can and ran to the check-out counter.  Ok, I didn’t really run because I’m soooo not a runner.   But if I was… lol… this was a no-brainer-must-have purchase.

I was so happy with my find, I forgot to ask the guy, I mean Paint-Associate, to shake the can for me.  Bummer… but I’ll be sure to give it a thorough shaking while doing my happy dance.

You can find these mis-tints or “OOPS-pre-mixed-paints” at any local paint or hardware store.   These paints get custom mixed for a customer, but for whatever reason the person decides not to buy. The store can’t re-shelf this pre-mixed paint, so they drastically mark down the price by 70-80% to get rid of it.

Next time you’re paint shopping at Lowes, Home Depot, Rona, Canadian Tire, or any of the brand name paint stores, watch for these amazing deals! 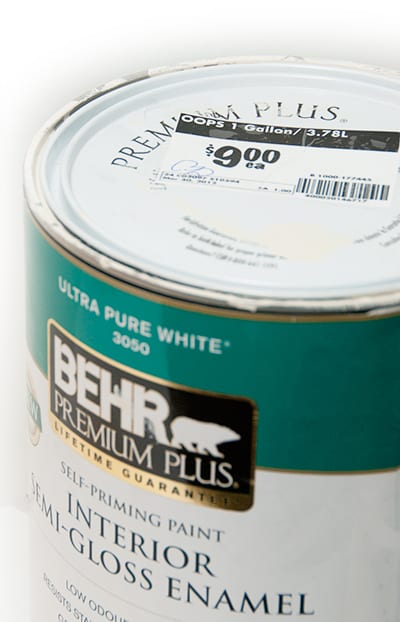 My next stop… I drove to the other cheapest place to buy paint…Walmart.

I recently discovered LOOP.  LOOP is a company which takes quality paints bound for the landfill and creates premium recycled paints.

What a great idea!  Walmart must have thought so too because LOOP is available in most Canadian Walmart stores from coast to coast. The colours are limited, only 8 designer colours in total, but for $13.88/gallon I’m looking forward to giving it a try. It’s a perfect way to keep re-finishing costs down while I recycle and reuse!

I have no idea what kind of coverage or overall quality recycled paints have, but once I give it a go, I’ll definitely share my experience and write a review.

While we’re on the topic of recycling and inexpensive paints Boomerang-Recycled-Paints  sell at Thrift Stores for $19.99/gallon.

Rona also has an Eco-Responsible brand, Rona’s ECO which is priced at $18.99/gallon.

I wanted to buy them all… but unfortunately ran out of shopping time.

I’ve learned the cheapest place to buy paint is often right under my nose at Lowes, Home Depot, Rona, Canadian Tire or any other large store which mixes brand name paints.  A tip… if you’re buying pre-mixed paints, it still needs to be thoroughly mixed.  Don’t get overly excited over your deal and forget to ask the paint guy, oops…I mean Paint Associate to shake your can!

Hope you had a fun day and thanks for reading… and, oh… if you know of any cheap paint resources in your area, leave a comment and let me know!

I will listen to the reply voice message several times. What if I hear what I have been latently dreaming about for these many years. Dear Joe, I am glad to write you my letter, as I really need your support. You know how important your opinion is to me. Today is February 14th and Peter and I are going to a restaurant.

Breathing from supernatural sensations in the lower abdomen, she seemed to have completely forgotten that her enemy was now wrapped around her. On the contrary: apparently, in some kind of half-oblivion, she worked so gently and skillfully with her tongue that Sever almost choked. With pleasure and growled softly. And the girl turns out to be not so inept.

Oh, I'm afraid this question is not cleared up so easily over the phone. You should talk to the producers. - Okay.

Not completely master there. Probably, he realized this and pulled off his panties. Then I started to fiddle with his penis, then I began to jerk him off, he welcomed it.